CLASSIC DOCTOR WHO ON BRITBOX – The Creature from the Pit 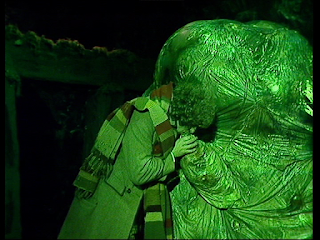 On 26th December 2019, 627 pieces of Classic Doctor Who content were made available to Britbox subscribers. Every Sunday in 2020, our Doctor Who expert, Tony Cross, looks back at some of the classic stories. Here is the Fourth Doctor adventure The Creature from the Pit...


The Creature From The Pit is odd. I enjoyed watching it but there are moments when the BBC budgets and borderline silliness make it a bit awkward. In particular we have the Erato problem, but more on that later.

The Doctor and Romana II land on Chloris, a planet where metal is scarce. The Lady Adrasta rules with the aid of wolf weeds and there is a mysterious creature in a pit with whom it will turn out Lady Adrasta has previous. The Doctor gets dragged into things, as is his wont and Chloris will never be the same again.

It just about works because all the actors involved treat it with the requisite levels of seriousness. Even the chaps playing the Monty Pythonesque comic relief bandits don't go over the top. They're clearly escapees from a totally different television series but their presence, whilst mildly irritating isn't crippling.

Credit to Tom Baker who is often criticized for 'silliness' but who manages to play his scenes with Erato as if he were dealing with a real alien creature rather than a giant glowing green testicle monster with an unfortunately phallic protuberance made out of weather balloons, wood and green paint. There is no way of getting around the fact that Erato is one of the series least impressive creations, at least when interacting with the cast. Nothing the director or cast does can distract from its glowing green bollocky nature I'm afraid.
Erato and the comedy bandits are the stories negatives, alongside the sudden switch of the Huntsman (David Telfer) from a bad guy to a good guy. This is the man in charge of the wolf weeds, which are rolling balls of vegetation used to hunt and capture Adastra's enemies. A man who we can assume has been responsible for one or two moments of "unpleasantness" in his time but with whom the Doctor seems happy to treat as an ally at the end. It just feels a little wrong.

However, there are many positives that include a lovely script featuring two of my favorite Doctor Who lines ever (although the final episode features large amounts of technobabble and a chunk of padding).

There is a wonderfully judged performance from Geoffrey Bayldon as the astrologer Organon, which would be worth the entry price alone.

Myra Frances makes Lady Adastra a villainess with a crisp, cold bite and Eileen Way gives her excellent support as her right-hand woman Karela. Frances is particularly good as Adrasta starts to unravel a bit as her plans start to fall apart and her interactions with K9 are priceless.

Eileen Way appeared in the first Doctor Who story ever as 'Old Mother'. Here she is sixteen years later having hardly appeared to age. It's uncanny, but I digress.

Lalla Ward doesn't get a great deal to do in this story but does what she needs to do well, although she does seem to have come dressed for a wedding.

In the end this is an enjoyable enough story that teeters on the brink of silliness but just about stays on the right side of it helped mainly by a cast that doesn't let the ridiculousness of what they're doing affect their performance. There are worse stories in Doctor Who but not many worse-looking monsters.
Tony Cross is the creator of the wonderful Centurion Blog's found HERE and HERE.