CLASSIC DOCTOR WHO ON BRITBOX – - Destiny of the Daleks 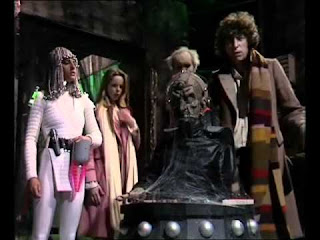 On 26th December 2019, 627 pieces of Classic Doctor Who content were made available to Britbox subscribers. Every Sunday in 2020, our Doctor Who expert, Tony Cross, looks back at some of the classic stories. Here is the Fourth Doctor adventure Destiny of the Daleks ...

We kick off Season 17 with Destiny of the Daleks, written by Dalek creator Terry Nation. I have grown tired of Terry Nation's scripts over the course of this blog because it seems to me that having created The Daleks back in 1963 Nation got lazy. The best Dalek stories tend to be written by other writers.

However, the additional input of script editor Douglas Adams helps breathe some life into this script. It isn't great but it isn't terrible either.

Perhaps the most controversial issue is the light-hearted approach to both Romana's regeneration and the Daleks themselves. Yes, I think it is a shame that Romana didn't get a 'proper' regeneration story - something I suspect New Who wouldn't have missed out on - and it is a shame that it is such a throwaway. In that sense, it does make regeneration less 'significant' but the trying on of bodies bothers me less. I've justified it in my head as being some kind of projections for the Doctor to look at whilst Romana tries to get him to approve 'copying' Princess Astra's body.
[Re-watch note - I notice Romana says she is 'regenerating' through this bit, not 'I've regenerated' implying it is an ongoing process not throwing away incarnations. I also note she refers to herself as a Gallifreyan, not a Time Lord. I suppose that can mean something or nothing depending on your point of view.]

The piss-taking of the Daleks is less easy to justify. It undermines them as an enemy, not helped by the rather shoddy looking nature of the Dalek props at this point. In fact, this is the point at which, picking up the banner from Genesis, the Daleks become the muscle to Davros. They're dull and stupid robots in this story, as opposed to the devious creatures of previous stories. Everyone in the Doctor Who production office at this point seems to have forgotten they are semi-organic. It's Davros that the Doctor gets to pit his wits against.

[I got more annoyed about this on re-watch. After all, Terry Nation wrote both Dalek origins stories so he should KNOW they're not robots. They have, to quote Professor Jansen: 'an organic content'. Although on a re-re-watch the implication seems to have been that without Davros the Daleks went all robotic and eliminated their organic content altogether.]

David Gooderson plays Davros this time around, not Michael Wisher. This is a shame because there is something missing from Gooderson's portrayal. I can't put my finger on exactly what it is but it just isn't as sparky. It certainly doesn't feel as 'deep' as Wisher.

[And his feet are going like billy-o when he's moving about. Rather obviously]
The other 'enemy' in this story is the robotic Movellans who I like because they're well designed (sort of disco ancient Egyptians if that makes any sense) and well played by Peter Straker, (the underappreciated but wonderful) Tony Osoba and Suzanne Danielle.

[There's an interesting story to be written about Movellan origins I think. But I'm a bit weird like that.]

There is also a smattering of prisoners. The main one is Tyssan (Tim Barlow) who doesn't get much to do except delivering the occasional piece of exposition early on and then runs around a bit thereafter. Also in amongst the prisoners is a young David Yip (who later went on to play the Chinese Detective in the early-1980s: a series I have fond memories of but haven't seen since it was broadcast).

It's a surprising multi-racial cast for Doctor Who of this period with the Movellans played mainly by BAME actors and the human prisoners being a cross-section of all races.

The plot itself is simple. The Daleks have come to Skaro to find Davros. They need his help to defeat the Movellans - with whom they've been stuck in a centuries-long stalemate. The Doctor and Romana II arrive and hi-jinks follow.

This is the Doctor's first use of the Randomiser, which takes him straight to Skaro, which doesn't bode well, does it? If the first thing your Randomiser does is take you back to the planet of your greatest enemies I'd be tempted to unplug the thing and do a little rewiring.

Tom's good in this but I should give a nod to Lalla Ward (Romana II). I have a soft spot for Romana II from my childhood. Lalla Ward gives her all the right notes & is basically playing a female Doctor. She and Tom clearly have chemistry, although at what point they became an item off-screen I don't know. Anyway, it works as a partnership.

So Destiny of the Daleks is OK with the only downside being the Daleks themselves (as I've already mentioned) and the cheap-looking nature of the corridors on the Dalek city. One of Season 17's problems - from my memory - is that it is the first time where Doctor Who's financial shortcomings really start to reflect in sets. But I might be being a little harsh as the Dalek control room looks pretty good - even if you can walk into it without any degree of significant hassle, which again undermines the 'threat' of the Daleks.

Perhaps the very definition of average Doctor Who at a time when even the average stuff was pretty good fun.

[With additional quibbles I'll stick to that judgment.]
Tony Cross is the creator of the wonderful Centurion Blog's found HERE and HERE.