CLASSIC DOCTOR WHO ON BRITBOX – The Keeper of Traken 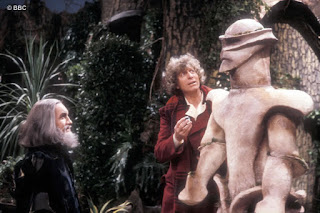 On 26th December 2019, 627 pieces of Classic Doctor Who content were made available to Britbox subscribers. Every Sunday in 2020, our Doctor Who expert, Tony Cross, looks back at some of the classic stories. Here is the Fourth Doctor adventure The Keeper of Traken ...

Find Tony's full Classic Doctor Who on Britbox list of reviews here.
You know I was enjoying this story but there was a nagging irritation at the stupidity of a number of characters of whom Kassia (Shiela Ruskin); Nemon (Roland Oliver); Katura (Margot van der Burgh) and Luvic (Robin Soans) stand out for their dumb acceptance of bizarre behavior from Melkur and each other.

Why does Kassia develop such affection for Melkur? Why does she go along with its plan so unquestioningly when Traken - apparently the centre of an Empire where everyone's spent thousands of years being nice to each other - starts piling up corpses killed by Melkur? And the whole blessed point about Melkur is that it is a calcifying evil thing in the first place, yet Kassia seems to ignore that because she's a bit miserable?

Katura and Luvic then seem to accept Kassia's actions almost without question. Traken is supposed to be peaceful and erene isn't it? Yet Kassia starts making accusations left, right and bloody centre. These people are supposed to be bright enough to be Consul's and yet act like credulous children. Only Seron (played by the ever-excellent John Woodnutt) seems to behave with the right level of intelligence.

Forgive my ranting but any story that relies on almost half its cast to behave like bloody idiots is on shaky ground in my opinion. That nagging irritation meant that I started getting picky. So other things I might not have dwelt on began to attract my attention.

There's the Melkur. It's the Master's TARDIS. It doesn't have a bloody door for a start. How does that work?

And finally in this rant but the fact that irritates me more than any other. In fact, it makes me want to grab Christopher H Bidmead by the throat and ask what the hell they were doing with the Master's second TARDIS. Previously it has been established that putting a TARDIS inside a TARDIS creates problems but apparently the Master can store one inside another without any issues at all. So this might have been forgotten as it has been a while since we've seen a story where it features as a plot point. So, that would be forgivable except that a TARDIS inside a TARDIS IS A MAJOR PLOT POINT OF THE VERY NEXT BLOODY STORY, Legopolis. THE NEXT STORY. It features a TARDIS inside a TARDIS.

Apart from that, the Keeper of Traken is lovely. It looks great. The costume and set design is lovely and all very A Midsummer Night's Dream. The cast, despite their character's stupidity, put in good solid performances.

I should mention that Antony Ainley does a fine job playing Tremas before he gets turned into the Master. The scene where the Master makes Tremas kill Neman whilst the Doctor looks on is played magnificently, almost as casually horrible. And yes the Tremas/Master anagram is also incredibly stupid. It implies that the Master wasn't just hanging around Traken for access to the source but also for the wordplay.

I should compliment Geoffrey Beevers for doing excellent work as the crispy Master and Denis Carey as The (old) Keeper.

Sarah Sutton makes her first appearance as Nyssa but doesn't really get a huge amount to do, although her TARDIS scenes with Adric work well.

The last time I watched it I really enjoyed it but this time one little thing - the TARDIS inside the TARDIS - got me picking at the story. I feel like one of those cartoon characters who pull at a loose thread on a jumper and ends up with nothing but a pile of wool.

I wish I hadn't let my irritation get the better of me because I did like this story and perhaps the next time I watch it I'll be able to let myself drift along without dwelling on its flaws quite so much. It might be that I've misunderstood something, somewhere. We shall see.
Tony Cross is the creator of the wonderful Centurion Blog's found HERE and HERE.