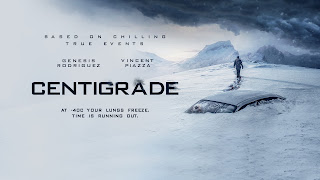 Steve Taylor-Bryant takes on the cold and claustrophobic thriller Centigrade thanks to our friends at Signature Entertainment...

Sometimes a film does not need a lavish set or a huge cast to be tense and exciting and moving. Often the less is more approach to filmmaking is where the gems of cinema lie, The Guilty a few years ago was a stunning film with pretty much only one visible cast member and a telephone headset, in Centigrade you get an emotionally moving, often disturbing, and always fraught viewing experience in a buried Land Rover with two cast members and it is one of the best films I have seen in a very long time.

Written for the screen by the film’s director, Brendan Walsh, and the story’s originator, Daley Nixon, the script is a tight and traumatic affair that puts both the cast and the audience through the wringer in a film whose pace is as perfect as pace can be. Trapped in the claustrophobic vehicle, Matt (Vincent Piazza) and his pregnant wife Naomi (Genesis Rodriguez) have to battle to survive, not just the elements, but themselves as depression, hypothermia, fear and the abandonment of hope lead to arguments and recriminations which just add to the physical aspects of being trapped, no water, low food, no phone service and the like. There is not one part of the scene I didn’t feel affected by in some way, there was no soft build up to their predicament, no nice pre-credit scene of a happy couple in Norway on a book tour, no, the film starts with them waking up in a dark vehicle trapped under snow and ice with no way out and doesn’t let up until the very last minute of the film, which is so bittersweet I still don’t know whether I am happy or sad.

Both Piazza and Rodriguez deserve much credit because as taut a drama as the script and the location make it, the cast have to take this nightmarish scenario and make you believe you are there, struggling alongside them. The scenes between the two flick and move from angry and blaming to fearful and supportive in a way that is highly believable that a couple would act during such a tense and frightening experience. The acting is just so good you almost forget in parts that you are watching a survival film where they must try and stay alive because you are wrapped up in their relationship issues, the recriminations of past actions, the secret keeping, and the inevitable birth of a baby, and Rodriguez especially has my eyes glued to the screen the entire time. These are performances out of the very top drawer and just add layers of intrigue and emotion to what I imagine was already a fantastic story in script form. The camera angles and the lighting, the use of the vehicle’s internal mirrors, make the darker elements of the film pop and really help with the claustrophobic feeling for the audience and interspersing the darker vehicle scenes with beautiful landscape shots of the Norwegian snow-capped mountains don’t let that tension loose because, as stunning as the landscapes are, it just drills home to the viewer just how dangerous situation the couple are in.

Centigrade is a wonderfully shot and tension filled movie with two stunning performances from a cast in sync with each other. Centigrade is available at the end of the month and should be classed as a must watch film.