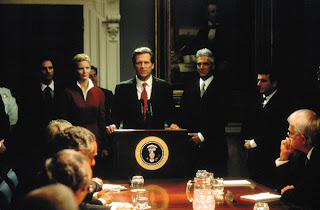 Steve Taylor-Bryant delves back into the murky world of American politics as he takes a look at The Contender, out on Digital this weekend thanks to our friends at Signature Entertainment…

After his Vice President suddenly dies, President Jackson Evans (Jeff Bridges) who is near the end of his final term, decides to leave a legacy by selecting a woman to fill the position. Enter Senator Laine Hanson (Joan Allen), who has shifted from the Republican Party to the Democratic Party. Initially appearing to be the perfect candidate, an allegation suddenly appears that she had been involved in an orgy as a nineteen-year-old in college. Confirmation Committee Chairman Shelly Runyon (Gary Oldman), a Republican (of course), leaks the information to the press, while using the press discussion as a forum to bring it into the hearings. During the confirmation process, Laine is the victim of a vicious attack on her personal life in which stories of sexual deviancy are spread. She is torn as to whether she should fight back or stick to her high principles and refuse to comment on the allegations. The Chairman desires to get a Governor (William Petersen) into the office. The Governor had become a national hero when he attempted to rescue a young woman from a car that crashed from a bridge into deep water near where the Governor had been fishing.

There is something quite wonderful about watching a political thriller in the vein of The Contender. American politics has always been a fascination of mine and I love even the cheesiest films and television on the subject, but sometimes you get the perfect storm of plot, casting and direction, and a subject that does not always interest a viewing public becomes mainstream just for a moment. The Contender is one of these films. Whilst the subject of a woman’s infidelity or appetites could come across as another white male fantasy story, this is not the case with The Contender, partly due to some astonishing writing, but mainly because Joan Allen is a supreme performer and plays Laine Hanson as one of the strongest women in the political landscape I had seen up to this point (which is around the year 2000 if my memory serves). To have Allen perform the role so heroically though you have to have an evil villain playing at the same level; enter Gary Oldman. Oldman rightly gets plaudits when he takes on complicated heroes, Churchill, Smiley etc, but when he takes on those greasy, flawed, sometimes downright nasty characters is where I believe he excels and as Shelley Runyon he adds another one to his ever growing list of entertaining baddies. Whilst The Contender is not the most complex of plots writer/director Rod Lurie (another underrated political thriller written and directed by him is Nothing But the Truth) handles the delicate subject matter well allowing the cast to all fully flesh out their characters. Whilst Oldman is my favourite, Allen truly deserves all the awards nods she received and is, as always, a very reliable and watchable protagonist. The rest of the cast is filled with more than competent stars that add a seriousness to the occasion, the likes of Christian Slater, William Petersen, and Jeff Bridges compliment the performances of the main two without ever stealing the spotlight for themselves and The Contender is better for it.

The only problem I have with The Contender is the timing of this digital release. Twenty odd years ago or whenever I first saw this film, having a politician as disgusting as Gary Oldman was a rarity which made the film really stand out. Oldman’s slick and smarmy Republican Committee Chair in The Contender, whilst marvellous at the time, is almost a liberal nice guy in today’s political landscape. Today The Contender turns from a dark, political thriller to a Wishlist of what we hope our politicians could actually be. The Contender is well worth a watch if you like thrillers, Joan Allen, or Oldman as a creep.
Image/Synopsis - IMDb.
Email ThisBlogThis!Share to TwitterShare to Facebook