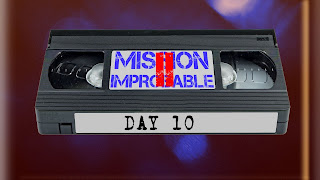 Your mission should you choose to accept it is to let David Ames' brain explode whilst thinking as he plays Mission Improbable: Day Ten...

What follows is the mad rambling excuse for me to abandon all other ventures and delve into my memory banks in hopes of culling the quarantine boredom with a little over-the-pond stars of my own.
Day 10.

Jake Gyllenhaal was in Jarhead with Jamie Foxx…

and Jamie Foxx was in Ali with Will Smith.