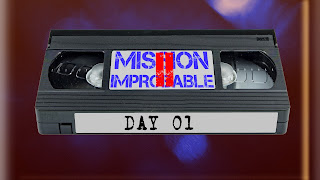 Your mission should you choose to accept it is to let David Ames' brain explode whilst thinking as he plays Mission Improbable II: Day One...

In our game, one would name an actor, and then the next person would have to name a movie this actor was in. Then the next would have to name another actor in that movie, and so on. You could also begin with a film if you wanted, but the game would continue much the same way. If you got stumped, you could call out the person before you, and they had to provide an avenue to continue the game, because if they couldn’t they were out. It would go this way until only one person remained, crowning them the victor.

This game was infinitely fun and time-consuming, and I carried it on to my other friend groups. My very best friend, Andy Fox, and I still play to this day, even over text. The only rules are that the films had to go to theater (no limited release or direct-to-video), and that for the most part the cutoff was films after 1984 (barring large franchises or HUGE films). Also, we were allowed to utilize voice actors only if both parties agreed.

What follows is the mad rambling excuse for me to abandon all other ventures and delve into my memory banks in hopes of culling the quarantine boredom with a little over-the-pond stars of my own, and that is where we begin.

Tom Cruise was in Interview with the Vampire with Brad Pitt…

and Brad Pitt was in The Tree of Life with Jessica Chastain.