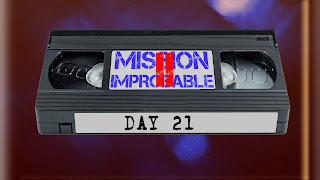 Your mission should you choose to accept it is to let David Ames' brain explode whilst thinking as he plays Mission Improbable: Day Twenty One...

Sigourney Weaver was in Avatar with Zoe Saldana

Robert Downey Jr. was in Richard III with Ian McKellen…

and Ian McKellen was in X-Men: Days of Future Past with Nicholas Hoult
Email ThisBlogThis!Share to TwitterShare to Facebook