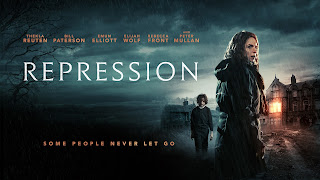 Coming to Digital HD next month thanks to Signature Entertainment, watch the trailer for Repression...

When child psychiatrist Marianne Winter (Thekla Reuten, In Bruges, Red Sparrow) moves to a remote area of Scotland to start a new life after the tragic death of her husband, her attempts at a new life are thrown off course. She starts treating disturbed ten-year-old Manny (Elijah Wolf, T2: Trainspotting), who draws pictures of terrible events and claims he can see and control her future.

As the drawings from Manny start to become reality, Marianne struggles against both the wall of silence from her colleagues and her own mind as she tries to uncover the truth behind the drawings.

A gripping and twisty Hitchcock-esque thriller set in Scotland that promises to pull you in and keep you on the edge of your seat, Repression (known in some places as Marionette) also stars Peter Mullan, Emun Elliot, Bill Paterson and Rebecca Front.
Signature Entertainment presents Repression on Digital HD 28th September