Film - Waiting for the Barbarians 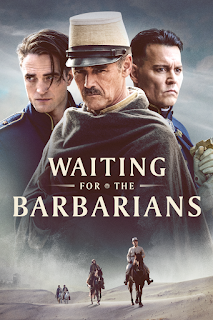 Featuring a star studded cast including Mark Rylance, Johnny Depp, Robert Pattinson and Gana Bayarsaikhan, watch the trailer for Waiting for the Barbarians, out on Digital next month...

The Movie Partnership, in conjunction with TaTaTu, and producers Iervolino Entertainment, are delighted to announce the release of their latest title, Waiting For The Barbarians will be released on early EST from 7th September and then on VOD from 14th September.
Adapted by double Booker Prize winner J.M. Coetzee from his own novel, the film is directed by Ciro Guerra.

The Magistrate, administrator of an isolated frontier settlement on the border of an unnamed empire, looks forward to an easy retirement until the arrival of Colonel Joll, whose task it is to report on the activities of the 'barbarians' and on the security situation on the border. Joll conducts a series of ruthless interrogations. The treatment of the 'barbarians' at the hands of the Colonel and the torture of a young 'barbarian' woman combine to lead the Magistrate to a crisis of conscience and a quixotic act of rebellion.

Waiting For The Barbarians will be available on Digital Download from 7th September and can be pre-ordered on iTunes here
Email ThisBlogThis!Share to TwitterShare to Facebook