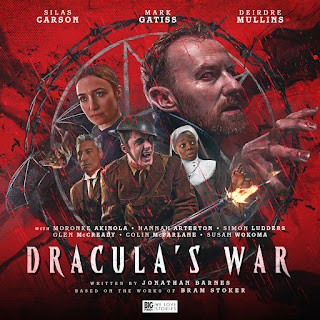 From the diary of Mrs Mina Harker, 25th January 1917: “I had hoped for many years that I should never again have to write such words as these. I had thought that all that befell us in our battle against the creature laid buried in the last century. Yet I have learned today that the story was not complete. The Count lives. He has returned at this darkest of hours when the world is locked in dreadful conflict. Terrible choices must be made as battle is joined. For, make no mistake, this is Dracula’s war...”

Inspired by the works of Bram Stoker, Dracula’s War is both a sequel to the original novel and the conclusion of a three-part connected series from Big Finish Productions, which begins with Dracula's Guests and continues in Dracula.

England is caught in the grip of war. Every day the casualties grow in number. Every day the outlook appears more bleak. And every day the need increases to win this conflict at any cost. Now the most dreadful possibilities are considered which would not be thought of in peacetime.

From a strange and secret nunnery to the library of the King, from a cell with an impossible occupant to the house of Mina Harker, a wicked plan is set in motion and a long-awaited revenge begins.

For this age of death and battle, this world sunk deep in blood, shall seem – to Count Dracula – very much like home… 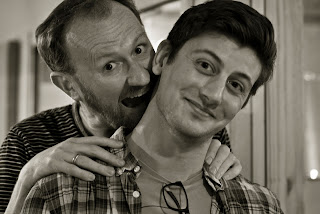 Actor Mark Gatiss said: “Dracula is certainly one of my favourites. When I read the book as a teenager I was blown away by how modern and thrilling it was. Frankenstein, by contrast, is a tough read. It’s an important book but not a great one. Whereas Dracula is the definition of a page turner!

“I used to read the comic Dracula Lives! when I was a kid. There was one issue where a group of torch-wielding villagers confronted the resurrected vampire with the words, ‘We only brought you back to life so we could kill you again!’

“It’s a very old vampire tradition, obviously, but Bram Stoker sort of invented this rather Byronic, middle European backdrop for it all which persists to this day. It’s just a wonderful, scary story, and in Dracula himself you have one of the great villains. Ancient, infinitely wise, infinitely corrupt – yet finally destroyed by the ingenuity of a few dedicated friends.”

Producer and director Scott Handcock added: “Dracula's War takes place about twenty years or so after the events of the original novel, set during the First World War. And what's synonymous with Dracula? It's blood. So pitching it at a time when there's so much bloodshed is such a frightening point in our history. It's a wonderful match of elements, and Dracula is a brooding, creeping threat over it all. It's very in-keeping with the original novel while doing something very new with the story.

“Dracula is a character who’s introduced to most of us at an early age – whether through books or film or just seeing the image of a vampire around Halloween when we’re growing up. He’s part of the collective consciousness and, in terms of vampires, the absolute standout. And when you think about how certain legends repeat through different cultures, there’s something eternal about the idea of a vampire. People want to prolong their lives – death scares us all – and Dracula embodies that: a creature who prolongs its own life by stealing that of others. I think that’s probably why it endures, because it presents us with a dilemma. We’re torn between the idea of an unnatural lifespan, living forever; but equally we want the human characters that we relate to more immediately to succeed.”

Dracula's War is available now as a three-disc collector’s edition CD for £19.99 or as a download for £16.99, exclusively from the Big Finish website at www.bigfinish.com.

Big Finish listeners can save money with the Dracula trilogy bundle (including the already-released adaptation of the novel Dracula, and the prequel Dracula’s Guests) for just £53 as a collector’s edition CD box set or £38 as a download.
Email ThisBlogThis!Share to TwitterShare to Facebook