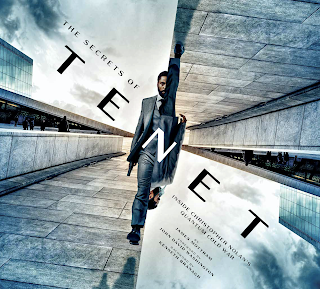 Released in conjunction with the highly anticipated film, The Secrets of Tenet: Inside Christopher Nolan's Quantum Cold War by James Mottram is out now, thanks to Titan Books...

Press Release
From Director Christopher Nolan comes a mind-blowing espionage thriller so unique that audiences will puzzle over its intricacies for years to come. The Secrets of Tenet takes readers on an exclusive journey into Nolan’s time-bending masterpiece, offering rare insights into all aspects of its creation. Featuring in-depth commentary from Nolan himself and a range of other key collaborators—including producer Emma Thomas and production designer Nathan Crowley—The Secrets of Tenet delivers an essential masterclass that lays bare the director’s process and his singular creative vision. Illustrated with candid behind-the-scenes imagery and compelling conceptual art, this is the ultimate exploration of a film guaranteed to linger in the imagination long into the future… and perhaps the past.
With a foreword by John David Washington and an afterword by Kenneth Branagh, this book will join Insight Editions’ strong line of books based on Christopher Nolan films, including Inception: The Shooting Script, The Dark Knight Manual, and Interstellar: Beyond Time and Space.

Christopher Nolan is one of the highest grossing directors in history and is among the most successful and acclaimed filmmakers of the twenty-first century. He is well known for his work on The Dark Knight Trilogy, Inception, and Interstellar. Nolan’s most recent film, Dunkirk, grossed $527.3 million worldwide and earned three Academy Awards for Best Sound Mixing, Best Sound Editing, and Best Film Editing.

James Mottram is a film critic, journalist and author. He has written several books on cinema, including The Making of Memento, The Sundance Kids, and The Making of Dunkirk, and contributed to numerous critical anthologies on everything from Japanese cinema to war movies. He lives in London.

The Secrets of Tenet: Inside Christopher Nolan's Quantum Cold War is out now from Titan Books.
Image - Titan Books
Email ThisBlogThis!Share to TwitterShare to Facebook