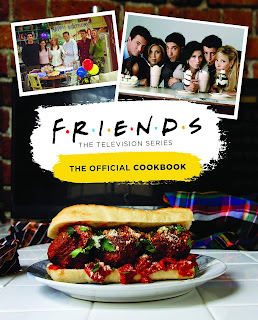 It’s the one with the scones bribe as Susan Omand tucks into Friends: The Official Cookbook by Amanda Yee, thanks to Titan Books...

The conversation in the office went something like this:

Me - I've got another cookbook to review from those wonderful folks at Titan Books! Are you OK with this?
Steve - will there be scones?
Me - oh yes! The scones recipe looks lovely...
Steve - wait a minute, the last time you said that they were cabbage flavoured!
Me - ah but this is a Friends cookbook so it’s Joey’s “Jam and a Spoon” scones
Steve - ummm...
Me - there's also a lovely cocktails section.
Steve - could I BE any more OK with it?

To paraphrase Janice, “Oh. My. GAWWWD!” Yes, I admit it, I’m a huge Friends fan. I watched every single episode of the long running comedy series as it first aired. I’ve hankered after a huge porcelain dog, wanted to try on a turkey head and know all the words to Smelly Cat. I also completely agree with Ross that they were on a break but that’s a different story for another time…

Anyway, when I got the chance to have a look through the official cookbook, written by Amanda Yee, I jumped at the chance and it surpassed every expectation. The tie-in with the series has been really well thought through. After a short introduction by the writer, we’re straight into different sections of recipes. A nice touch is a mention of the specific episode which inspires each recipe at the top of the pages and a short paragraph explaining how it fits in. There are quotes from the shows, dozens of  beautiful photos, both of food and Friends episodes, and notes from Chef Monica dotted around the pages when needed. There are the usual recipe sections with appetizers, snacks, sides, mains, sweets and desserts but it was also good to get a selection of breakfast dishes, sandwiches and drinks, with Pizzas and Pastas getting their own section too. The Drinks recipes, by the way, are really well done with the main recipe being non-alcoholic but with “adult versions” added suggesting the kinds and measures of alcohol to add in to make cocktails should you want. [“should we want…” – Ed].

But my favourite two sections of the book, alcohol and scones notwithstanding, come near the start and the end of the book. The first section is “Monica’s Blue Cupboard Basics” and gives you recipes for food that you’ll end up using in other recipes; jams, sauces, stocks, pickles and a wonderful savoury pie crust. The other highlight for me was the “Dinner with Friends” section near the end. These are three full dinner menu plans with dishes that complement each other, including Monica’s Friendsgiving Feast, Phoebe’s Faceless Foods, and The Food of Chandler’s Ancestors which ends up being a marvellous Chinese meal! 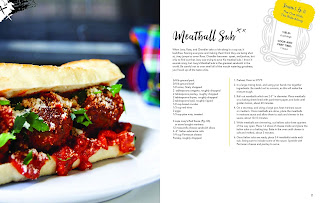 From a purely practical recipe book point of view, you have to remember that the book, like the series, is American so some of the food isn't quite what you'd expect [American gravy is NOT like British gravy - Ed] and the measurements are in cups and sticks. However, it’s easy to find measurements conversion tables online and it didn’t put me off trying the recipes. Also do check the ingredients carefully for allergens and dietary requirements as these are not highlighted in any way and I also spotted that vegans are not very well catered for here. The other thing that I think could have been added to the book is an index at the back that lists recipes by the main ingredient rather than the fancy title or category; for example, if I was looking for recipes using beef mince, the Sandwich section of a cookbook (above) doesn’t immediately spring to mind as a place to search.

But, to be honest, you’re not buying this book as purely a serious cookery book; although the recipes are lovely, well explained and easy to accomplish. There’s even a page that tells you how to put together a cheese platter or, as Chandler pitched it, Milk that you chew! No, this is a book that you buy mostly because you are a Friends fan or as a gift for a Friends fan – bear in mind that Christmas is less than 100 days away now. Just remember... 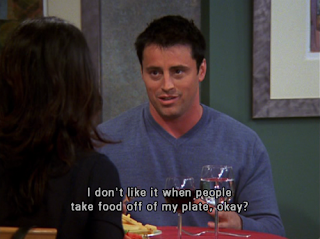