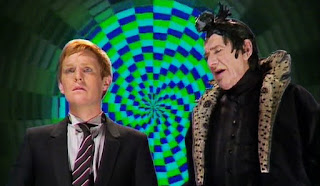 On 26th December 2019, 627 pieces of Classic Doctor Who content were made available to Britbox subscribers. Every Sunday in 2020, our Doctor Who expert, Tony Cross, looks back at some of the classic stories. Here is the Fifth Doctor adventure Mawdryn Undead ...

Find Tony's full Classic Doctor Who on Britbox list of reviews here.
With its timey-wimey plot and almost total absence of violent death this could be a script by The Moff, although it would have to happen at twice the speed and in half the time; be part of a hideously long drawn out story arc and see Turlough revealed as Tegan's son to make it truly Moff esque. Oh and the sonic screwdriver would have to do something important somewhere.

As it is this is a JNT, Grimwade and Davison story so we're stuck with a simpler tale drawing on the complexity of time travel, the curse of immortality and the Brigadier's nervous breakdown.

This story is, of course, responsible for the whole UNIT dating debate. How can the Brigadier be teaching in a school in 1977 when all the hints of previous stories featuring UNIT and the Brig suggest they all happened in the 70's and 80's. A timey-wimey conundrum all of its own. This however is not the time or place for a discussion of that issue. Let us just carry on as if nothing has happened.

It is, of course, a wild coincidence that the Doctor should land at a public school where not only is one of their pupils a mysterious - and possibly alien - student but that at the same school the Doctor's old chum Brigadier Alistair Gordon Lethbridge-Stewart is teaching mathematics. Part of this - the Turlough part - seems to be the Black Guardian's doing. The Brig's appearance does just seem to be a coincidence, which the Black Guardian overlooked.

This is the first of the 'Black Guardian' trilogy, which sees Valentine Dyall return. He's got a great voice, like Gielgud gargling with gravel and is suitably grumpy looking. However the Guardian's tendency to go for dead birds as head ware does make him slightly less difficult to take seriously. The Black Guardian appears to be trying to wreak his revenge on the Doctor and rounds up Turlough to do his dirty work. Guardians cannot be seen to act directly so Turlough, upon the promise of being freed from Earth promises to kill the Doctor.

I like Turlough. He's a breath of fresh air as a companion: cowardly, devious, sneaky but with a smart intelligence and low animal cunning. He's played pretty well by Mark Strickson to, even if he does look a little old to be at school still. There's a mystery to Turlough that time will - hopefully - clear up (look it's a story arc...whoop!)

It's also wonderful to see Nicholas Courtney again after some time. His Brigadier is as much a part of Doctor Who as the TARDIS itself and it is nice to see him meet up with another Doctor, even if one of the Brigs doesn't quite remember. I reckon they should re-title this story The Two Brigadiers. Splendid chaps, both of them. Courtney gets to show a slightly more pained side of the Brigadier to, which helps add an extra dimension to the character.

The villains of the piece are a gang of aliens, led by Mawdryn (played by one of my favourite Doctor Who guest stars David Collings. Collings is making his third appearance in Doctor Who here having been in Revenge of the Cybermen and Robots of Death.)

They stole a device from Gallifrey that they hoped would give them the power of regeneration. It has done, but without stability and their fate seems to be to regenerate, degenerate, die and regenerate once more. Forever. Trapped on a ship going nowhere for eternity. An intergalactic gang of Flying Dutchmen. It's a fate worse than death and as a result these aliens don't want the Earth, the galaxy or the universe under their power they just want to die and considering their form seems to include having throbbing spaghetti stuck firmly on their heads perhaps that isn't surprising.

They might take the Doctor's regenerations from him to do so but they're not threatening, although that's partly because Mawdryn is already aware that the Doctor will have to return to the ship in order to save Nyssa and Tegan.

Nyssa and Tegan aren't given a great deal to do in this story, except a lot of waiting and fretting. They do get aged and then youthed. Oh and Nyssa, continuing a clothes related theme that seems to run through this season, is now in another new, more revealing outfit than the last.

I suppose this is natural when one of the main sub-plots in this story is the introduction of Turlough, which means that we're back to having three companions clogging up the TARDIS again, which is too many. This problem is made worse when one of them has a large back story to deal with. In fact Turlough's deal with the Black Guardian is going to make him a difficult companion to write for full stop. After all if his raison d'etre is to kill the Doctor how do you prevent him doing so if he's permanently with the Doctor?

Anyway the question will be is TARDIS big enough for four?

Whilst the story is a rather gentle one it is quite a good one. There's food for thought, a new interesting companion, the Brigadier's return - twice and it is nice for the enemy to be fighting for something so 'ordinary' as the right to die.