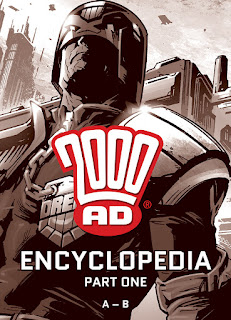 Written by writer and journalist Scott Montgomery, this expansive new project that will be serialised in regular instalments over the next year.
Scott Montgomery said: “Having been a 2000 AD reader since the age of nine in 1981, I was delighted to accept when Matt (Smith, Tharg the Mighty’s earthly 2000 AD editor droid) offered me the chance to write the 2000 AD Encyclopedia. This is a huge honour and the timing was perfect; coming right at the start of lockdown in March. I can’t think of a better way to ‘work from home’ – engrossed in the minutiae of nearly 45 years-worth of the Galaxy’s Greatest Comic and also celebrating 30 years of the Galaxy’s Greatest Spin-Off – Judge Dredd Megazine. Encompassing major and minor characters, classic stories like Flesh from the earliest issue – through to future masterpieces like The Out in 2020 - I hope that fellow 2000 AD fans will enjoy this informative guide to the thrill-archive and beyond!”

Included as supplements with the Megazine, the 2000 AD Encyclopedia promises to become the go-to resource for the hundreds of creations that have appeared in the Galaxy’s Greatest Comics over the past four decades.

The first instalment, covering A to B from Mike Carey and Andy Clarke's punky urban SF series TH1RT3EN, from 2002, to John Wagner and Arthur Ranson's gritty 90s' anti-hero Button Man, is published with Judge Dredd Megazine #424, which is on sale from Wednesday 16th September. 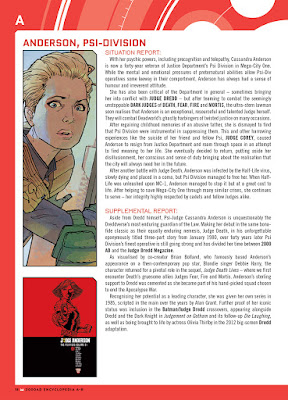 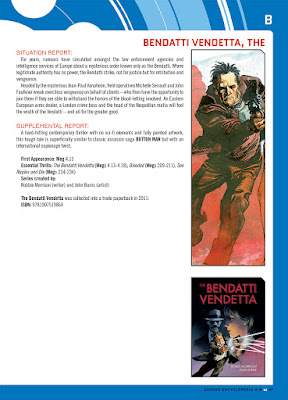 The Judge Dredd Megazine is available in print from all good comic book shops and newsagents, as well as in digital from the 2000 AD app on Apple, Android, and Windows 10 devices, and DRM-free digital direct from 2000AD.com.

The whole series will be collected into a single volume for publication in early 2022, as part of the celebrations around 2000 AD’s 45th anniversary.

Matt Smith, editor of 2000 AD, said: “As 2000 AD approaches its 45th anniversary, the comic's assembled a formidable stable of characters and stories over the past four and a half decades. For anyone not equipped with a vast Betelgeusian brain, it may be intimidating trying to keep track of them all - but no more! The 2000 AD Encyclopedia is your new go-to resource for all the strips that have appeared in both the Prog and Meg, with a comprehensive rundown of creators, notable series, and where the stories have been collected for handy access. No Squaxx dek Thargo should be without it!”

Rebellion's Head of Publishing Ben Smith added, "2000 AD and the Judge Dredd Megazine have made a profound cultural impact in the past half-century. Much of today's global popular culture would be unrecognisable without the work of the artists and writers who have contributed to these ground-breaking comics. Their influence can be felt across generations of not just UK talent but internationally as the waves that this comic started ripple out through film, music, television, literature and beyond. Only now will the towering achievement of decades of stories, characters and prophetic visions be brought together and laid out for everyone to lose themselves in, finding much-loved favourites, hidden treasures and some shocking creations with each turn of the page."

He worked on the editorial teams of the Dandy and then Commando comics for publisher DC Thomson & Co. Ltd from 2004 till 2016. The Long, Big Kiss Goodbye – an original crime novella, was published by Telos in March 2007. He has scripted The Broons and Oor Wullie comic strips for the Sunday Post newspaper. His written work has appeared in publications such as the Beano, Thunderbirds Are Go, Starburst, Doctor Who Magazine, The People’s Friend, My Weekly, Sunday Mail, The List and many others.

He is currently writing the official 2000 AD Encyclopedia, serialised in Judge Dredd Megazine – which will be collected in book form in early 2022. Previous 2000 AD/Megazine work has included writing the history of Rogue Trooper in 1996, updated in 2006; and compiling The Dredd Files, a detailed, monthly journey through the early years of the Judge Dredd strip, published in the Megazine in 2007.
Images - 2000AD
Email ThisBlogThis!Share to TwitterShare to Facebook