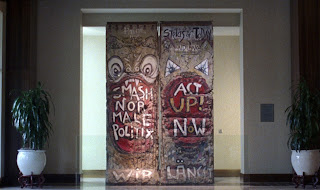 In the years since the fall of the Berlin Wall, sections of its 3.5-metre high edifice have been transplanted to the USA and re-purposed as public monuments in sites across the country. Courtney Stephens’ and Pacho Velez’s sharply crafted filmic travel essay catalogues over sixty of these concrete monoliths in their unlikely new locations, documenting each in elegant tableaux. Standing beside the relics, owners, custodians and passers-by are invited to consider what these scattered fragments of history may have come to represent in this strange new context—prompting reflections on ideas of freedom, borders, and the enduring ideological legacy of the Cold War.
I grew up in West Germany during The Cold War. My father was in the Royal Air Force and I spent half my primary school years and the first few years of my secondary education living in West Germany, an experience to this day that I remember fondly. Always the history buff, and still with a fascination for all things Cold War related, we had a trip through Checkpoint Charlie into the East, the other side of the wall and were left in no doubt what that barrier represented for the years it was up. Such a significant barrier that its removal was a worldwide televised event and the Western part of the country I grew up in joined with its Eastern neighbour for the past time in decades. What I did not study, or even think about if I am honest, is what happened to the wall after it was no longer needed. Thanks to a travelogue documentary by Courtney Stephens and Pacho Velez I now know where lots of it went… all over the United States of America.

As with a lot of travelogue types of films, there is no strict adherence to a historical documentary format and any meanings or significance come mainly through the images on screen. There are a few exceptions where the filmmakers speak to some very interesting people about the wall and, all of a sudden, this is no longer a pretty movie about a historic relic but it becomes a significant essay on modern day American life. The historical and political significance of the wall is covered as the directors' visit segments on military bases, the signature segment in the State Department, and various pieces of the wall in Presidential libraries. Whilst some of the wall dotted around the country is walked past, driven past in the case of two parts in the middle of a freeway, or just treated as novelty art, there are a couple of moments in the film when the film looked at what the wall represents to the black community, especially in Illinois, and on the “freedom” side of the Mason Dixon Line in Ohio, and that opened up a world of relevance for me that I had either been unaware of or blind to. The wall was a tool of repression, of control, a symbol of the lack of freedom those people living behind it had. To have those same tools of evil described to me as the black experience in modern America was shocking, unsettling, and anger inducing, and the film becomes powerful because of it. It is no longer about segments of 13 feet high concrete that are in random towns and cities but it is a reminder that things haven’t really changed in the West, that not every citizen is as free as we like to think they are. Whilst the film moves from travelogue to political statement of fact, so the significance of the Berlin Wall changes.

The American Sector is by accident or design a very moving film that is about more than graffiti'd concrete from a bygone era and more about how the passage of time and perceived freedoms aren’t always what they seem to be and I applaud the filmmakers for taking me on this journey of discovery.
The American Sector is on until 12th September at the Open City Documentary Festival. Find out more and book tickets here.