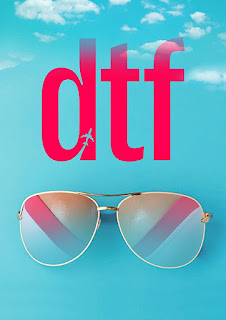 Marc Nash checks in and checks out DTF, a documentary by Alan Bailey, streaming now on Amazon Prime...

Alan Bailey was a professional football player with a blink and you’d miss it career. Out of the game in his mid-20s, he used the services of the professional players' trade union to study film and this is his first full length documentary. Don’t worry it has nothing to do with football, but everything to do with masculinity and is rather troubling. Clearly he didn’t get the film he had conceived of originally.

Alan has a Scandinavian mate who is a long-haul airline pilot. He has recently lost his wife and has agreed to be the subject of Alan’s film about finding love on Tinder all around the world, seeing as he flies to many cities and gets many different ‘looks’ accordingly. Now this Tinder love-round-the-world premise struck me as flimsy, but it quickly breaks down anyway, for the pilot is a sex addict and binges in his layovers between flights. Alan tries to keep the film on track by inquiring if all pilots act the same, with a girl in every port and this need to unwind to extreme and excess with the responsibility of having 400 people’s lives under your control each time you fly, but this rationale dissolves just as quickly as the Tinder love notion.

The pilot has his features pixelated out and his voice distorted to protect his identity, since his employers would not approve of how he chooses to spend his downtime in full-on up mode. We follow him on his potty-mouthed trail of rampant misogynistic attitudes and drunk-as-a-skunkness from international city to international city. It could be possible to have sympathy seeing as he is a recent widower, but the tirade of words about women and expecting sex on each first ‘date’ pretty quickly purges any empathy. And because his face is pixelated, we get no sense of his emotional expression (other than drunken fury through his words), so the camera falls back on Alan to provide the reaction shots and thus Alan unwittingly becomes the film’s focus, because he has a range of responses that the pilot simply does not. Alan seems like a good egg and is appalled by his friend’s attitudes and behaviour, but is drawn back time again by the exigency of him making a film and that money has been sunken into the project so he has to finish it, when on several occasions he may just want to run away from his badly behaved friend. 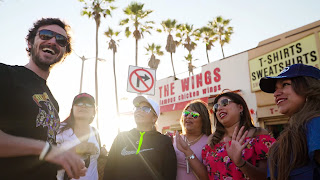 Structurally and stylistically there are a couple of problems with this, the first that half the soundtrack is of a computer-distorted voice which gets quite wearing over 80 minutes. The second, that Alan is left standing around uselessly having to fill when the pilot is in a bar with a date, or he has been abandoned totally and this is pretty unengaging. But these pall into insignificance when the ‘buddy’ relationship is put under unbearable pressure and we move from a Tinder Love film, through a film about a sex addict, to violent and exploitative sociopathic behaviour.

It’s been building throughout the film that the pilot is fed up with Alan remaining outside of all the action. It’s not clear whether he’s aggrieved at Alan being a friend yet remaining aloof from all the socialising, or that it's his status as the film director that the pilot sees as giving Alan all the power. Either way he gets Alan drunk at the casino, then spikes his drink in a strip club. Alan is completely zonked out as the pilot gets a lap dancer to do her thang on his unresponsive body, while shouting exhortations as if Alan could feel anything. It’s little short of sexual assault, since Alan certainly is in no state to give his consent and we’ve moved from finding love on Tinder to paid for sexual activity. It also smacks of revenge on the pilot’s part. Alan is treated as meat in the same way he has wished to treat women but has largely failed throughout the film.

I think you can guess at the fallout when people wake up sober. The film began to remind me of the fictional documentary “Man Bites Dog”, in that the camera, responsibility and the stakes, have all turned on the director. The camera has been following a sociopath round and only Alan seems oblivious to it. So ultimately I’m unclear what it all adds up to. Some men behave as sexual animals is hardly a new insight. Like Alan, we’re all asked to become voyeurs to this egregious behaviour. That such a man of excess is in charge of an airliner is scary, but that in itself can hardly be viewed as a salvation for the film. In the end, you kind of feel Alan is out of his depth and almost that he got what he deserved, except he also got a film out of it to set him up for the future in the industry perhaps. But he’s no Louis Theroux. This was more akin to Sacha Baron-Cohen as if he was finally beaten up by a recipient of one of his prank set-pieces. A troubling experience but one that was also hard to pull away from. As perhaps the director himself might have been better off doing.