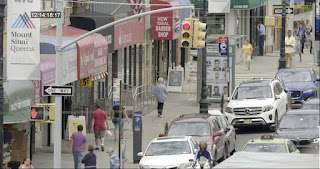 With the documentary nominated for the 2020 Open City Award, Steve Taylor-Bryant watched Intimate Distances, thanks to the Open City Documentary Festival...

In Intimate Distances, legendary casting director Martha Wollner traverses the streets of Queens, New York City in search of an actor to play a criminal in a film. As she asks potential candidates the same set of deceptively simple questions, a straightforward setup sparks a series of fascinating and compassionate encounters between strangers. Reminiscent of surveillance imagery, cinematographer Jarred Alterman’s long-lens photography creates a sense of distance, whilst the close-miked audio conversely feels too close for comfort. Through its subtle tensions and dichotomies, Phillip Warnell’s incisive film examines how we live in public—raising complex questions about how we relate to social, urban and cinematic spaces.

Intimate Distances is a strange little film at first glance. Its primarily shot from a rooftop looking down at the intersection of 34th Avenue and Steinway in Queens, NY and follows a little older lady wandering up and down the block and, other than some British narration of what sounds like an 80’s gangster tale, nothing really happens for 14 minutes. The lady is Casting Director Martha Wollner and she must have something trusting about her as she stops random strangers on the street to ask them where they live and whether they have ever been on one track and found themselves suddenly shifted in a different direction in their lives. Person after person gives over personal stories to this random lady they had never met. From people just giving their names and where they live, to folk like Samir, the want to be life coach, who deep dived into his hellish mental health, Martha seems to have an eye for a stranger with a story and in her disarming way she manages to get such private thoughts out of them.

With shaky ground level shots on occasion and a rooftop camera that trails people as they walk, added to the violent narration and unnerving soundtrack on occasion I am not sure what Intimate Distances is supposed to be but I found myself enthralled nonetheless. Martha pleased me, she was pleasant and non-judgemental, despite hearing some darker thoughts and reactions from strangers on the street, but I am not sure I am academically educated enough to understand the point of the film. It is not a documentary in the classical sense but is it a social experiment? A piece of art? Surveillance taken too far? Or a little of each? All I know for sure is the camera angles and soundtrack gave this New York a 1970’s Dirty Harry type feel so aesthetically it was very pleasing and that I found Martha Wollner an infectious lady who most definitely would have a way of getting me to open up. What a very interesting way to spend an hour.
Follow Steve on Twitter @STBwrites
Image - Open City Documentary Festival
Email ThisBlogThis!Share to TwitterShare to Facebook