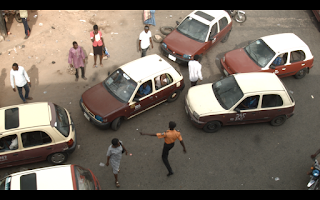 Trouble Sleep is, almost, a piece of music. A collage in sights and sounds. Following two men, Fred and Akin, as they go about their lives in Ibadan. Ibadan is Nigeria’s third largest city and the film makes you feel how chaotic and crowded it is as people and cars weave in and out of people and cars.

Fred, with a degree in Engineering is about to start a new job as a taxi driver.

Akin, collects tax for the National Transport Union from the cab drivers. This is one of the highlights of the film for me. The tax collectors, who are – like all tax collectors – not the most popular of people dance in and out of the traffic collecting money from taxis without the cabs stopping, marking them with chalk to show that they have paid. There is something of the bullfighter about the way these men shimmy through the cars and people. Nothing ever seems to stop. Later in the film Akin talks about a dream he had where he called out ‘maka’ in his sleep. He called it out repeatedly. ‘Maka’ means chalk. He had lost the chalk which he uses to mark the cars and was trying to get some from someone else. It seemed, to me at least, to indicate how stressful the job was.

At one point in the film the tax collectors are talking about how people call them ‘thugs’ and reel off a series of stories about how people have driven over their feet, knocked them down with cars, scratched their faces with keys or hit them with an axe. The combination of their stories and the sight of them in action does make it seem a risky kind of a job.

Fred’s first appearance comes when he is sitting at a bar with a friend who is already a taxi driver and that friend lists all the challenges that Fred will face in an attempt to earn enough money to make a living, which includes paying tax to people like Akin and bribes to the Police. The Police who can make a driver’s life difficult if they want to and easy if they are paid. No one seems to make a big deal of this. The money handed over to the Police is just another tax, like that imposed by the National Transport Union.

The other lead in this story is Ibadan itself. A swirling hurricane of a place. Full of sound and fury signifying life. My Dad always says that, for him, the sound of London is the sound of sirens. The sound of Ibadan seems to be beeping of horns and the continual noise of conversation. Everyone always seems to be moving day and night. At one point, Alain Kassanda, uses a long extract from Patrick Chamoiseau’s ‘Texaco’, a novel written in 1992. That extract seems to be key to the film.

This is a documentary where you get to taste, for a moment, life in an entirely different place at an entirely different pace. Kassanda does not seem to make judgements about the people or the place he is just using the camera as a witness. Showing us what we might never experience for ourselves and that is a door to genuine understanding, which can only be a good thing in a world of increasing division.