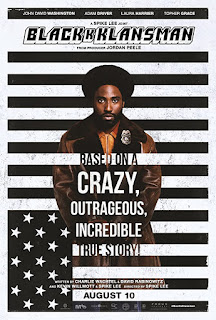 Kraig Taylor-Bryant did some investigations of his own as he watched the 2018 film BlacKkKlansman...

A film has never been more relevant than BlacKkKlansman. With the Black Lives Matter movement having been sparked anew by the murder of George Floyd, I find it more important than ever that people educate themselves on the mistakes of the past, which is exactly what director Spike Lee does with BlacKkKlansman.

The film opens to a clip that I didn’t recognise in all honesty, which I think shows already that racist events of the past aren’t being taught enough. Which is why I did my own research and discovered that it is a reshot clip that is from the film “Gone with the Wind”, the scene is intended to depict the outcome of the Battle of Atlanta, in which the southern states that were fighting in support of slavery (the Confederates) lost against the north of America, which would later affect the outcome of the American Civil War entirely. Upon further research I also scoured for interviews with the cast and director and, to my disgust, found that, out of the viewers that chose to like or dislike the videos, a third of them chose to dislike them, showing that, exactly as Spike Lee is trying to tell us at the end of the film, that racism still exists.

The choice of a clip similar to the Gone with the Wind scene being included could have been intended to show the effect that this continued belief of cultures/races fighting for “superiority” can have on people, by advertising the needless death it causes. You could also say he’s establishing perhaps that the confederates lost, and yet they’re still fighting to have their way as we advance a little further in time showing a clip of a speech made by a Doctor Kennebrew Beauregard (Alec Baldwin). In the clip the doctor promotes racist beliefs, showing the perspective of the confederates and their anger at the changes that were made following the end of the civil war, as people of different ethnicities are put in schools together, the doctor refers to these events and all the changes as an “international Jewish conspiracy” clearly advertising the white supremacists who were still fighting in their own way, against the government of their country. This then leads into the introduction of Ron Stallworth (played by John David Washington) into this setting, immediately making us concerned for him, as he enters Colorado Springs police station for his job interview as the first African American detective in the Colorado police department.

If you’re unaware of the story, Ron Stallworth is a police detective who manages to infiltrate the Ku Klux Klan, in a time when the KKK has become an organised unit under the first Louisiana based “Grand Wizard” David Duke (played in the film by Topher Grace) in the early 1970s. The main plot of the film follows the true story of how Ron Stallworth manages to get accepted into their ranks through his friend “Flip Zimmerman” (Adam Driver), who attends the meetings, embodying Ron Stallworth after the real Ron mistakenly using his real name when leaving a message for the “chapter leader” Walter Breachway (Ryan Eggold) over the phone. It was through research however that I found that in reality Ron Stallworth wrote a letter to the KKK P.O box and Stallworth’s friend is in fact not called Flip Zimmerman who through research is not Stallworth’s friends real name, as the real Ron Stallworth has no intention of disclosing it. Of course the changes still keep the message and story of the film the same though, and these were made with the intention of protecting the man that put his life on the line for the real Ron Stallworth and using the phone to contact the KKK is merely to help the film appeal to younger audiences as younger cinema goers may find it harder to pay attention to our protagonist writing a letter.

Regardless there are a number of important scenes/ quotes that not only could be applied to today but make this film worth watching so that we all remember the significance of them. One of these scenes was subtle but stuck with me throughout the film and this was before Ron Stallworth contacts the KKK and is working in the records room. Ron has to constantly keeping bringing his fellow officers records on convicts that they continue to refer to as “toads” to each of the criminals on record that they’re referring to, which not only establishes the that there are still racist police officers in the work place but what concerns me as that each of the criminals is of a black ethnicity, which basing off what I’ve seen in online footage of police brutality, I can’t help but wonder if these people had actually committed a crime, or if the officers that arrested each of them, simply assumed that they were.

Building on that there is another scene in the movie where Ron Stallworth attempts to stop a bombing by arresting the woman who’s planting them, however whilst doing so gets stopped by other cops who believe the convict who states that Stallworth was ‘trying to rape her’, which again shows the level of discrimination in the police force both at the time and still experienced nowadays following the police reaction to black lives matter protests.

Several scenes featuring one of the icons of the Black Panther Party, Kwame Ture, also caught my attention including the presentation he held at a nightclub. In the speech Ture reminisces of his visits to the “Saturday matinee” in which he would watch Tarzan where he would witness Tarzan killing the black savages and he would cheer Tarzan on. The representation of various ethnicities in a positive way is still not prominent enough today because there are still many films such as “Hobbs and Shaw” that jump to choosing a person of black ethnicity for the villain or a lack of including them as positive role models in general in cinema. We are still yet to see a black James Bond or Doctor Who or Batman, however the inclusion of a black superhero in the Black Panther film was certainly a step in the right direction. This then leads to a simple yet powerful quote that Ture makes in his speech in which he states, “if not now when”, when will we see real change politically, and in all forms? This is a question being asked back then in the 70s and is still being asked fifty years later, that is what I believe Spike Lee is trying to tell us in this scene and with this line of dialogue.

I think the inclusion of all of these significant lines and scenes says enough about the fact that Spike Lee isn’t just trying to tell us a story, he’s trying to educate us, whether it be through bravely exposing the racism in the police both back in the 70s and nowadays, showing the transition from the American Civil War, to Ron Stallworth’s story, to major events of today, as when we reach the end of Ron Stallworth’s story in the film, Spike Lee chooses to include footage from the modern day by fading from a clip of the KKK in the 70s into modern day. The director chooses to feature protests from anti-Semitic protests to black lives matter protests, which I think is used to show that there are still battles being fought for black rights as well as wars being fought by people who still think Jews are a threat to them. Following that we even see a clip of the real David Duke (as opposed to the David Duke in BlacKkKlansman) promoting Donald Trump’s campaign as the first steps towards “taking America back”, showing that there are still those fighting for superiority (just like the film shows earlier in the 70s) who are even being supported by their president, who won’t openly admit intentions to end the violence. This then leads to a clip of a car inhumanely running over a number of people who were protesting for the black lives matter movement and a tribute to Heather Heyer, a white woman, who was tragically killed, protesting for the black lives matter movement, showing just how much things haven’t changed.

The ending of the film is what will stay with me the most though, the American flag being upside down, to show that America is in distress, because African Americans are in distress, they don’t feel safe in these trying times, and only American voters can change that. The decision to make the flag change to black and white seemed symbolic to me in several ways and one of those being that America is black and white, there is no such thing as a white America.
Follow Kraig on Twitter @Kraigandhismac
Images - IMDb
Email ThisBlogThis!Share to TwitterShare to Facebook