CLASSIC DOCTOR WHO ON BRITBOX – Four to Doomsday 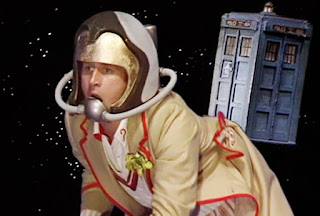 On 26th December 2019, 627 pieces of Classic Doctor Who content were made available to Britbox subscribers. Every Sunday in 2020, our Doctor Who expert, Tony Cross, looks back at some of the classic stories. Here is the Fifth Doctor adventure Four to Doomsday ...

Find Tony's full Classic Doctor Who on Britbox list of reviews here.
Four to Doomsday is an OK story, which I had almost wiped from my mind after I had watched it last time. Even now I can feel it slipping slowly away leaving just fleeting images: the Manopticons floating CSOly about the place, Stratford Johns frogged up as a real-life Baron von Greenback, Monarch; Tegan's skillful drawings coming to life as the de-frogged Persuasion (Paul Shelley) and Enlightenment (Annie Lambert); the odd moment when Bigon (Philip Locke) lifts up his...well...face to display the android underneath; Adric's gullibility (or stupidity); Nyssa's trick with the Sonic Screwdriver and a pencil...

All these moments will be lost, like tears in the rain.

It's not that any of the performances I have mentioned in passing are bad. Quite the contrary. I like Stratford John's Monarch. It is nice to have a Doctor Who villain who values his urbanity (or should that be urbunkanty [Sorry]) and hardly ever raises his voice. He might overestimate his own abilities and under-estimate the Doctor but at least he is polite. The only downside is - like many a Doctor Who monster - when he has to waddle about. On his throne Monarch has a certain class but standing in front of the Doctor waving a gun he just looks pathetic. Perhaps that was the point. In the end all Monarch's civilized repartee was a front, underneath he was just a gangster.

Enlightenment and Persuasion make a fine pair too. A touch of Sapphire and Steel with a dash of Roxy Music they look pretty enough, but once again beneath the surface, they're just thugs. Polite, dry and quite sophisticated, but thugs nonetheless.

Bigon is an android Greek philosopher, kidnapped by Monarch on one of his previous visits to Earth. He's not human but is. A walking, talking illustration that a man is the sum of his memories. An Athenian democrat he has rejected Monarch's offer of power. The fact that he's still alive is an illustration of Monarch's self-confidence. It takes the Doctor's arrival to give Bigon his opportunity and he takes it. He almost loses but perhaps the desire to keep fighting is what makes him human.

Bigon is the consistent good guy but the other humans - collected on Monarch's previous visits - seem to have been bought off by Monarch. Bert Kwouk plays Lin Futu who goes from grass to resistance after a discussion with the Doctor.

More memories: there's the silly stuff around the cricket ball spacewalk; the odd ability of Tegan to speak an aboriginal dialect spoken 35,000 years ago but the TARDIS being unable to translate it; poor old Nyssa getting hypnotized and Adric getting knocked down by an angry Tegan.

Ah...Tegan. She's an angry young thing. Sod travelling through space and time she wants to get to Heathrow Airport. She's the first companion who seems to genuinely dislike being on board the TARDIS. She is also dangerously stupid on occasions, like when she tries to pilot the TARDIS. She is almost - but not quite - as annoying as Dodo. It is not Janet Fielding's fault. She does a fine job in this story. She's a real master at showing the full range of frustration until she's weeping with rage. It just isn't an attractive quality in a companion.

And there we have it. An unmemorable but entertaining story with some excellent lines, a bit to think about and one or two things to get annoyed about. So, Doctor Who in a nutshell.