CLASSIC DOCTOR WHO ON BRITBOX – Kinda 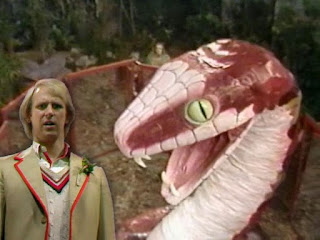 On 26th December 2019, 627 pieces of Classic Doctor Who content were made available to Britbox subscribers. Every Sunday in 2020, our Doctor Who expert, Tony Cross, looks back at some of the classic stories. Here is the Fifth Doctor adventure Kinda ...

Find Tony's full Classic Doctor Who on Britbox list of reviews here.
I suspect Kinda might be one of those stories that some people dislike intensely. It's not packed with action. It's metaphysical and intellectual. The Doctor is peripheral. All in all, it's a bit of an oddity.

Especially as the script was initially approved by Christopher H Bidmead who is better known normally for his more rigidly scientific approach to the series. It feels like a fairy tale, despite a handful of machines. Or a parable.

Whilst it is clearly influenced by Buddhism this is one of those stories that has many possible readings, which is one of the reasons I like it. It is the kind of story DVDs were designed for. So that each watch reveals a little more. I suspect a lot of the theories you could come up with would be tenuous in the extreme but it is fun trying.

What most people complain about with Kinda is that its production values don't match its ambitions. The jungle set is fine if you can ignore its obviously flat camera-friendly flooring, the Kinda look like refugees from a 70s Festival and then there's that bloody snake. Trust Doctor Who to build up to a massive end of story climax that features a blow-up plastic snake. Except that's a lazy criticism.
I don't remember the snake as a let down when I watched it at the time and I was 11. And when I watched it this time I was carried along by the story enough to ignore it, although decades of fan mockery make me aware of what I'm looking at. It just doesn't matter. On the DVD we can replace Puff the Magic Adder with an all bells and whistles CGI version, which is pleasant enough but affected my enjoyment by precisely not a single jot.

What makes this story really great though is a series of wonderful performances from the guest cast (and Peter Davison).

Simon Rouse as Hindle normally gets most of the praise. Hindle's fear drives him insane and Rouse is genuinely uncomfortable to watch at some points (for the right reasons). The moment where - after the Doctor has stood on one of his cardboard people - he shouts "But you can't mend people" has stuck with me since I watched it at the age of 11.

However, Rouse isn't the only good performance. Nerys Hughes, operating at the other end of the sanity scale is calm, restrained and "right". There is real chemistry between her and the Fifth Doctor to and a part of me wishes he'd dumped the kids and taken her off as a Companion.

Then there's Richard Todd as Saunders. Richard Todd is a British film legend and he could be forgiven for slacking off for four episodes of 'mere' Doctor Who. After all, there's a number of actors of lesser pedigree that do that, but he pitches a great performance. The change between the pre-box Saunders and the (sorry) post-box one is great. His casting is almost short-hand for a different type of England to a black and white stiff upper lipped England. England of Empire, which makes sense in a story that is about colonialism as much as it is about anything else.

Mary Morris as Panna, the 'wise woman' of the Kinda is wonderful too, with a fine mix of gravitas, spookiness, and sarcasm. Mention should also be made of Jeff Stewart, Anna Wing, and Roger Milner as the suitably creepy figures in Tegan's dream. I still find those sequences are filled with dread and menace.

Janet Fielding is great in the first two episodes, when she gets to do different stuff than usual but she then gets sidelined for a while before some scenes in the final episode, including an argument with Adric that unfortunately marks the start of the 'age of bickering' for Doctor Who.

This though is the story where two things become obvious: first, there are too many companions to deal with so Sarah Sutton left behind in the TARDIS for pretty much the whole story and second the limitations of Matthew Waterhouse's acting. I haven't dwelt on this too much before because Waterhouse gets enough of a kicking from Doctor Who fans to last a lifetime but in a story like this, surrounded by excellent performances he looks adrift.

But let us not end on a low note for me Kinda is one of the best Doctor Who stories. Its limitations are irrelevant because of a strong and unusual script and some fine performances.