CLASSIC DOCTOR WHO ON BRITBOX – The Visitation 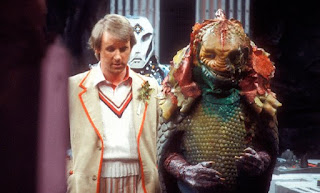 On 26th December 2019, 627 pieces of Classic Doctor Who content were made available to Britbox subscribers. Every Sunday in 2020, our Doctor Who expert, Tony Cross, looks back at some of the classic stories. Here is the Fifth Doctor adventure The Visitation ...

Find Tony's full Classic Doctor Who on Britbox list of reviews here.
The Visitation is a pretty good story even if - as someone on my Twitter feed pointed out - it has certain similarities to The Time Warrior with a character from Eric Saward's radio writing thrown in.

It starts strongly building up tension before killing off everyone we've met so far. In New Doctor Who they'd have all been bumped off in the pre-credit sequence. This almost feels New Whoish, perhaps it is the younger Doctor. You can certainly see the same story with David Tennant.

Saward deals well with the multiplicity of companions: knocking them unconscious, splitting them off to do various different jobs and taking over their minds. However, whilst Janet Fielding and Sarah Sutton deal with what they are asked to do pretty well I'm afraid Matthew Waterhouse is starting to look out of depth. There does seem to be a limited lifespan for the three companions. It makes the stories too messy to plot effectively and the constant bickering is already becoming tedious. There's a Eastenders like grumpiness to pretty much everyone that doesn't quite fit Doctor Who (at least in my opinion).

This is Peter Davison's fourth story and I'm quite enjoying the change from Tom Baker. His Doctor's clearly less certain and less forthright. He tries to convince and help, even when he's being frustrated. As I mentioned earlier you can see the seeds of the New Doctor Who Doctors in his performance.

Mention should be made of Michael Melia's convincing turn as 'Terileptil Leader'. The costume is slightly restrictive and it definitely is of the 'obvious bloke in a costume' type. However the face is impressively designed and they would be one of my favorite aliens if it weren't for the hands, which are too stiff and too obviously gloves. I blame the director Peter Moffatt for that. It's a schoolboy error in Doctor Who: like focusing on the traditional weak point of a Doctor Who monster costume - the feet. Other than that Moffatt does a reasonable job even if the story does lack any real sense of urgency.

However, Melia rises above the stiffness of the costume and gives quite a nice vocal performance. The Terileptil Leader has a certain brisk, cold intelligence plus obvious menace. These are a ruthless race. Willing to wipe out humanity in order to settle three of them plus some androids in the place. Pretty spacious for three of them.

I also liked Michael Robbins as Richard Mace. Mace is an out of work actor whose become a highwayman since the plague shut London's theatres. Mace feels real in a story without much in the way of supporting parts except a gang of rent-a-peasants and a very bored horse.

I enjoyed it even if it is a gentle little story lacking much in the way of genuine tension, although the death of the Terileptil leader is disgustingly gruesome really for the timeslot. The funny thing is as I've been writing this review I've realized that, even though I found it fun, I'm less impressed with the direction in retrospect.

If it had the same power as the first five or ten minutes of the first episode then this story would be an absolute classic but alas it doesn't.