Film - Dr. Who and the Daleks 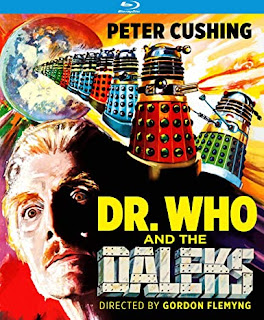 Our Doctor Who expert, Tony Cross, is journeying through all of time and space to bring us his thoughts on every available Doctor story. Today is the Peter Cushing adventure Dr. Who and The Daleks which is out now on Blu-Ray...

Dr. Who and The Daleks is the film version of The Daleks made by Amicus films. It was released in 1965. In colour. On the big screen. Woo-hoo.

It is a different world to the television series. There is no real mystery to 'The Doctor' here. Peter Cushing plays Dr. Who who is a human being who simply invented the TARDIS and set it up in his back garden. It is still bigger on the inside but sadly looks far drabber and less interesting than the television version.

I think a lot of how much you like the films is based on how much you like Peter Cushing's portrayal of Dr. Who. He plays him far more sympathetically than Hartnell. He is much more the doddery grandfather. He is gentle. There is a distinct lack of curmudgeon. I find it fine for this film. It is tonally correct. You could not have put the Hartnell Doctor into this version of Doctor Who. It would not fit. There's very little 'edge' to Dr. Who and The Daleks.

Even the Daleks seem less sinister here in their multi-coloured glory than they are in The Daleks itself. The film versions are bigger, chunkier and more colourful.

The rest of the main cast are also different. Barbara is now one of Dr. Who's grandchildren & played by Jennie Linden. Barbara probably gets the least to do of any character in the film, which makes her sadly forgettable. Susan is still the Doctor's grandchild but is actually a child, played by Roberta Tovey. Susan is rather a precocious young thing, but Tovey's performance is pretty darn good. I have a low tolerance for child actors, but Tovey is possibly the best thing in it and - whisper it - does Susan's lone journey from City to TARDIS better than Carole Ann Ford. Ian is Barbara's boyfriend. He is played by Roy Castle.

I should say here that I like Roy Castle. When I used to do a paper round in Gerrards Cross, back in the mists of the 1980s, Roy Castle would occasionally pass me whilst he was jogging. He never failed to say hello as he passed, which was always rather nice. Alas Ian is the comic relief in Dr. Who and The Daleks, which means Castle does not get a chance to be subtle. It is broad slap-stick stuff. I do not think many people would have done it better than Roy Castle did it, but it just seems a bit out of place.

The Thals are a beautiful bunch with their lovely golden hair. Led by Alydon (Barrie Ingham) they're the same pacifist farmers as in The Daleks except they're convinced to throw over their pacifism far more quickly in the film than in the television series.

Let me leap untidily to another point: the design. They have obviously gone for a similar look to the original television story but on a far grander scale. In fact, the Dalek city looks great but feels less discombobulating than the television version. Gordon Flemyng's direction certainly lacks the panache of Christopher Barry's. For example, in The Daleks the first time we see a Dalek is in a rather well-directed shot when they are seen in pull back as the Doctor, Ian and Susan step out of the laboratory. Flemyng makes an almost identical attempt in the film and it just seems much flatter. Even allowing for the huge scale.

Now it might seem, from all of the above, that I do not like Dr. Who and The Daleks much but that is not quite true. It's entertaining enough, it's fun to see the Daleks in bright colours and with their fire extinguisher guns.

The film takes the main plot of The Daleks and removes all the nuance and edge (and there is some in The Daleks), which means it flies along. It is not terrible. It is just not as good as the television story. Perhaps because it does not have any of the edge of the original television series. The classic example of that being the difference in the fate of Ganatus in Dr. Who and The Daleks and The Daleks. It is one of the more annoying moments of the film.*

It passes the important test: it is fun. So, if you get a chance to watch it you should. You could certainly watch this if you knew nothing about Doctor Who at all. Ideally at the cinema - where they do crop up on occasion.

* I think watching this so soon after the television version made me much more aware of the flaws than I might have been.