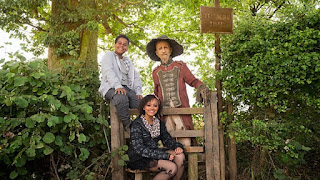 Following the much loved and critically acclaimed 2019 adaptation of Worzel Gummidge, a third new one-hour film will be screened on BBC One later this year, titled Saucy Nancy...

Mackenzie Crook has written another beautifully crafted and magical episode, inspired by the classic books by Barbara Euphan Todd, which he will direct and star in, bringing a world of adventure to all the family.

Leopard Pictures, part of Argonon Group, are once again partnering with Treasure Trove Productions and Lola Entertainment to bring another glorious story to life for an audience of all ages. The film has been commissioned by Shane Allen, Controller Comedy Commissioning for the BBC and Charlotte Moore, Chief Content Officer for the BBC.

When Worzel Gummidge, Susan and John visit a scrapyard, Worzel overhears the grumbling of a foul-mouthed old friend - the carved ship’s figurehead, Saucy Nancy. She has been languishing, unsold in the yard for years and longs to return to the sea. Worzel and the kids promise to get her there, but will her ship be waiting? Worzel doubts it, but Nancy is convinced. She can feel it in her carvings.

Adventure unfurls, as the strange foursome navigate their way to the coast on foot, by bus, wheelbarrow, motorbike and sidecar. It was never going to be straightforward. In a rare trip out of Scatterbrook, Worzel gets to see a wild moorland and the spectacular white cliffs of Seashell that provide the backdrop to this story of friendship and belonging.

Mackenzie Crook says: “I'm excited and grateful to be making a new episode of Worzel Gummidge after a difficult year for everyone. We're heading out of Scatterbrook for this story on a day trip to the seaside, some fresh air and some wide open space.”

Shane Allen, Controller Comedy Commissioning for the BBC, says: “What is it with Mackenzie and shows set in a field? Following on from last year’s bucolic eco-fables we find Worzel in mischievous form dispensing his sun-baked wit and wisdom in another heartwarming tale. This cements BBC One’s unique reputation as the home of UK family comedy drama.”

Last year’s Christmas episodes of Worzel Gummidge received a wealth of glowing praise from audiences and critics alike. You can read Barnaby's review of those here.

Saucy Nancy, written and directed by Mackenzie Crook, is a Leopard Pictures, Treasure Trove Productions and Lola Entertainment production for BBC One. It is executive produced by Kristian Smith for Leopard Pictures, Lisa Thomas for Lola Entertainment, Mackenzie Crook for Treasure Trove Productions and rights holder Patrick D. Pidgeon for Pidgeon Entertainment, Inc. It is produced by Gill Isles and Ben Caudell is the Commissioning Editor for the BBC. International distribution of Worzel Gummidge is handled by ITV Studios.