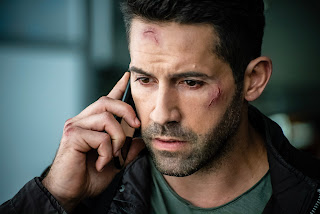 Coming to Digital HD next month courtesy of Signature Entertainment, watch the trailer for Legacy of Lies...
Press Release
Ten years ago, a fatal misjudgement made Martin Baxter resign MI6. Now he’s on his last legs, bouncing cheap night clubs and moving around Europe with his 12-year-old daughter Lisa.

One night, Martin is approached by Sasha Stepanenko, a young Ukrainian journalist who is determined to find the secret files that were at the heart of Martin's failure as a secret agent. Martin refuses to help her, afraid to be thrown back into the world of espionage and high stakes.

But then, as Martin exits his house, two men in familiar black suits are waiting for him. When he comes to, he sees Tatyana, an agent of the Russian Secret Service and his daughter Lisa. Tatyana gives Martin an ultimatum: he will bring her the files and Sasha, or his daughter will disappear. The ex-MI6 agent has 24 hours to complete his mission…

Written and directed by Adrian Bol and starring Scott Adkins alongside Honor Kneafsey, whose work can be heard, if not seen, in the TIFF Festival favourite animated film Wolfwalkers, Signature Entertainment presents Legacy of Lies on Digital HD 12th October.
Image - Signature Entertainment
Email ThisBlogThis!Share to TwitterShare to Facebook