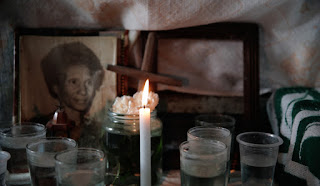 Tony Cross gets three for one as he watched A Radical Empathy: Esery Mondesir’s Haitian Trilogy at Open City Documentary Festival recently...

A Radical Empathy: Esery Mondesir’s Haitian Trilogy is a triptych of three films – Una Sola Sangre (2018); Pariah, My Brother, I Follow You, Show Me the Route to the Springs (2020) and What Happens to a Dream Deferred? (2020).

All three are about the Haitian diaspora. The first is focuses on a Haitian-Cuban family in Havana; the second and third on Haitian’s living in Tijuana, Mexico. Mondesir is, I think, keen for us to understand what these people’s lives are like. There is not much in the way of drama. These are ordinary people dealing with ordinary issues, but their lives have not been ordinary in any sense I would understand.

Una Sola Sangre (2018) is probably the most familiar of documentary types. Indeed, it reminded me of Trouble Sleep, which I watched yesterday. The focus is on one family and the way they live their lives, but we get an insight into what being part of the Haitian diaspora is like and what being Haitian means. There is talk of Voudou, but this is not the Hollywood cliché of zombies and snakes. This is the people’s day-to-day religion whose Gods are part of everyday life. It is all very conventional, although occasionally Mondesir drops into the conversation himself, helping to draw out stories.

This is more of a trend in Pariah, My Brother…and What Happens to a Dream Deferred? Tijuana is home to many Haitians who have ended up there after making there way up through South and Central America. Their ultimate objective, The United States. But that one is hard to do. Modern politics is touched upon most directly when we hear Donald Trump and stories of Donald Trump’s comments on ‘shithole countries’ and ‘Haitians all having AIDS’ in What Happens to a Dream Deferred? This is a sown into footage of a group of friends cooking a meal, talking on their mobiles, chatting, and rapping. These, the film seems to suggest, are just ordinary men trying to get on in the world. Why are you afraid of them?

What Happens to a Dream Deferred seems the most interesting of the three? We watch a group of men making soup for New Year. We here them chat and watch them cook. Meanwhile on-screen text comes up. Some of it from the poem Harlem by Langston Hughes, some of it transcription of the accounts of how the men made it to Tijuana. There’s footage and audio of Donald Trump. There are text messages to friends and family wishing everyone a Happy New Year and there is a black and white performance sequence built around a Haitian song. It’s a interesting mix and match of media.

Mondesir himself left Haiti in 2001 and now lives in Canada. His introductory comments talk about the need for radical empathy and solidarity. In the present world where everyone seems to be focused on hatred, fear, and division Mondesir seems like a revolutionary. If there is a place in the world that you could pick to show the horrors of slavery, imperialism, and capitalism it is Haiti. The first country to abolish slavery then Haitians were screwed by the French, used by the Americans in their proxy war with the Soviet Union which meant they were ruled over by a couple of psychopaths for far too long. Yet, the US and the rest of the world seems astonished they want to go elsewhere to try and find a better life.

If by watching these documentaries, which tell their stories gently but effectively, Mondesir can stir a person to radical empathy then that makes them worthwhile.