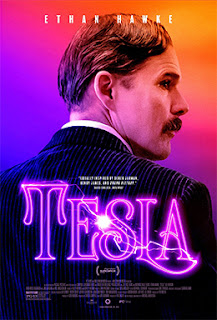 Steve Taylor-Bryant gets to bask in the electric glow of Ethan Hawke playing Tesla...

There should be a rule in filmmaking that if you are making a biopic it has to be interesting. 99% of people chosen to be the subject matter in a biopic are well known to the audience with much of their lives common history or gossip, of course there is the odd exception but when you research the great majority of interesting figures from history for your film you aren’t likely to dig up much more than is already known by the average person with internet access. This means as a filmmaker you have a responsibility to get my bottom on a seat to view your vision. This is why biopics are so hit and miss, some are just cradle to grave linear tales, some just concentrate on certain famous aspects of a subjects life, and unless you are making a musical, it's not common to find a biopic that entertains as much as it educates. Until now…

Step forward writer/producer/director Michael Almereyda and get your plaudits from me because Tesla is some of the most fun I have ever had watching a biopic, but viewer be warned, it is so interesting in its construction, so different in its delivery that you may not get it, or even like it. If you do though it so rewarding as a film, a piece of art, and proof that there is still originality out there in film-making land. The titular Tesla is portrayed here by the ever wonderful Ethan Hawke, who I think I would watch in absolutely anything such is his talent and ability to choose fascinating roles. Hawke is ably backed up by Kyle MacLachlan as Thomas Edison, and one of the films stand out performers in Eve Hewson as Anne Morgan, J.P. Morgan’s youngest daughter and unrequited lover of Nikola Tesla. The film is so quirky in parts that, to keep the viewer on an even keel and not let what is happening visually detract from the story, Anne Morgan is our narrator, helping us link the moments together but not necessarily in the period biopic way you may expect, including multiple scenes of Anne Morgan with a laptop showing you Google searches. Along with Edison sat in a bar with an iPhone, some modern dance music included in the score, some painted backdrops which hark back to simpler days of filmmaking, and some invented history including an ice cream cone fight, Tesla could be accused of being a bit film school, or a bit arty for a general release but to those detractors I say boo. For a long time film fans have been vocal about the lack of experiment in the filmmaking process, we lament the lack of risk takers involved in the industry and then we get a wonderfully interesting and inspiring film like Tesla and moan at how different it is to what we wanted or expected.

Also, stay through the whole film, even if its not the best experience for you, because towards the end you get a song treat that is worth every penny of what you paid to watch the film.

With some great acting moments, some highly original visuals, a fantastic mix of film-making styles from yesteryear, and a sense of humour, Tesla is an astonishing film that will more than likely divide opinion, which is as fitting a tribute to the man as I can think of.
Follow Steve on Twitter @STBwrites
Tesla is on Digital Download 21st September from Lionsgate UK