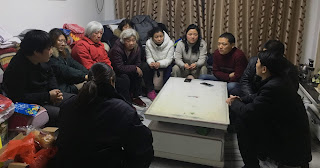 Tony Cross made The Choice to watch the documentary at Open City Documentary Festival recently...

‘The Choice’, made by Gu Xue, is just over an hour long and is simply a long unbroken take where we watch a Chinese family discussing the fate of an aunt. The Aunt is on life-support in intensive care. It seems that there is not much chance of recovery, so decisions must be made.

It is fascinating to watch as the family’s relationships with each other play out across the hour. There are hierarchies here within what is – to an Englishman – a large extended family. I suspect if this were my family I would not be involved in a discussion about an Aunt’s life with my other Aunts. It is part of what makes this such a fascinating film to watch. You see the younger members of the family deferring to the older ones, whilst still trying to get their own way. You see how some members of the family try to silence or ignore others. There is an underlying question about whether they have come together too early to make this decision. Whether the young son is the person who should be making the decision.

It would make a fascinating double-bill with Lulu Wang’s ‘The Farewell’. A fictional and non-fictional version of a similar event as Chinese families deal with the impending death of a key family member. I think both would give you an insight into Chinese culture. We come back to radical empathy again, as discussed by Esery Mondesir in his Haitian Trilogy, which I reviewed on this site earlier.

If we want to understand the world, we need to experience the world. It is hard to do that unless one is wealthy, and wealth automatically isolates you from reality anyway. Billionaires have more in common with each other than they do with the citizens of whichever country they live in. The arts can give you that insight, whether through fiction, like ‘The Farewell’ or documentary, like ‘The Choice’. You can see the differences in cultures, but also the similarities. The truth that we all worry about the health of our family, we all grieve, we all love, and we all worry about money.

In one respect ‘The Choice’ is simply us eavesdropping on a conversation that we should not be eavesdropping on, but the family never seem to notice the camera or act differently because it is there. This is a fly on the wall and its reality feels real because the issues are real.

There are many different types of documentaries and The Open City Documentary Festival illustrates that with the breadth of choice. Perhaps if someone decides that they can pay me a full salary to spend my time watching and reviewing I’ll get a chance to watch everything one day and I can see the themes that bind them altogether, but – whatever their intentions – surely the a key theme is empathy. How we try to understand the world.

What the world needs now, in the words of the poet, is love, sweet love. But if we can not have that then perhaps a simple understanding that we are all humans, we all live on the same dying planet, orbiting the same Sun. We all love and grieve. We are all happy. We all want what is best for the people we love. We are all, whatever politicians tell us, part of the same family. Our differences can be overcome, but to do so we must put ourselves in other people’s shoes.