Film – Waiting for The Barbarians 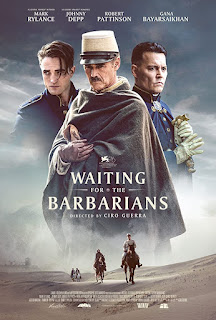 Steve Taylor-Bryant takes a watch of the historical period piece Waiting for The Barbarians...

This is a hard review to write and I hope you will bear with me as a lot of my words will sound negative but the film is not actually bad, it's just not what it could have been and that’s been playing on my mind since the credits rolled.
I had actually read J.M. Coetzee’s book, a long time ago now admittedly, but remember feeling educated, and moved, and inspired to learn more and, whilst my love of history took me down a more modern route than Empire colonisation, I still remember Waiting For The Barbarians which is a sure sign that the book was good. When I heard the film was getting the big screen treatment I was excited, I expected a slow burn and intelligent story with very little action but also expected a film that would be remembered for decades to come like Zulu, or Empire of the Sun, or films of that ilk that I grew up watching often with my granddad. What I got though, whilst very watchable and not at all a bad film, was nearly two hours of a missed opportunity.
The all-star cast should have led to epic. Mark Rylance is a phenomenal character actor who has never been anything less than great. Depp, whilst hit or miss in blockbusters, nearly always excels as an actor in films that require a more deft touch and always excites me, and Robert Pattinson, the hot property of the moment, has always made bold choices and has rightly been lauded on multiple occasions. The director, Ciro Guerra, made a film a while back called Embrace of the Serpent which was utterly magnificent in every way. And J.M. Coetzee was here adapting his own novel, so I was sure that the spirit and emotion of the novel was in safe hands. So why is the film only good and not great? Why am I left feeling disappointed? Well, maybe my expectations were too high, that is certainly a possibility, but I think its more than that, I think it's in the writing and a director not strong enough to fight for a particular vision. 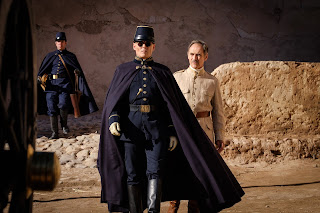 Rylance plays The Magistrate a soft, warm, loving man who adopts the locals in this colonial outpost as his own people. He understands them and their culture, speaks the language and is very forgiving. This is fine but hardly rings true of what a colonial empire building servant of the crown would have been like. He may well have been a man of morals and empathy, but he wouldn’t have shown that to those colonised, he just wouldn’t have done. And then we have Depp as the police colonel on a routine inspection of the outpost who is the polar opposite of Rylance. He is almost a cartoon villain in his performance, evil incarnate in an albeit calm and Depp like manner, dressed like a Nazi from an Indiana Jones film with his weird sunglasses. I get that, in the story, the colonel and the magistrate have to be different to each other but to let two great actors go so far apart in their portrayals that they no longer belong in the same movie, let alone have any chemistry together, is almost criminal. Then there is Pattinson, billed third in all the marketing and on a roll of great press and future excitement and… hardly in the film at all, and when he is, he is just not important. I kept sitting there waiting for this great character to come to life, why would you hire such a big talent and then have him play a drunk little secretary of no importance to the film or the plot?

The essence of the book, the feel and the heart and the drama just seem to be missing. Waiting for the Barbarians is an okay historical period piece, worth a watch as we don’t get many of those these days, but for a director to allow the cast to be so off piste shows a naivety that shouldn’t have been allowed to happen. J.M. Coetzee is a very talented man, Nobel Prizes prove that and, whilst it is his book that he has transcribed, it feels like a different story all together. You usually get that with inexperienced writers that maybe don’t understand the nuances of the source material, but that is obviously not the case here so either the book is impossible to bring to the screen, of which there are many to be fair, or perhaps allowing another writer to take a fresh perspective is what should have happened. I am edging towards the latter mainly because I believe Waiting for the Barbarians is only a few character tweaks, and some pacing issues away from being what it could have been. If Depp and Rylance were just a little more convincing or Depp more restrained, Rylance more emotional and if it did not drag in final third then I firmly believe we would all be writing reviews demanding Oscar recognition. Sadly, that is not the case.

Image - The Movie Partnership.
Waiting For The Barbarians will be available on Digital Download from 7th September and can be pre-ordered here
Email ThisBlogThis!Share to TwitterShare to Facebook