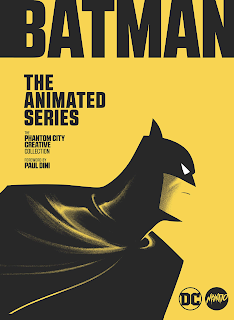 Steve Taylor-Bryant may have drooled slightly as he read Batman: The Animated Series: The Phantom City Creative Collection, out now from Titan Books...

“Mondo is proud to present Batman: The Animated Series: The Phantom City Creative Collection, a visually breath-taking celebration of the Emmy Award–winning series.

Known for their limitless passion and incredible ingenuity for film and television posters, Mondo turns their attention to the highly acclaimed show Batman: The Animated Series. The show first aired in 1992 and was instantly met with critical praise for its sophisticated writing and distinctive, noir-influenced art style, generating an intense following that still exists today.

Over the years, Mondo has received global recognition for their astonishing artisanal posters, and their creations for Batman: The Animated Series are no exception. The studio has partnered exclusively with the award-winning artist at Phantom City Creative, Inc., Justin Erickson, in order to bring this show to life in a striking and unparalleled way. Filled with Erikson’s slick graphic design as well as beautifully rendered illustrations, this Batman: The Animated Series art book is a one-of-a-kind tribute to one of the greatest animated shows of all time.” 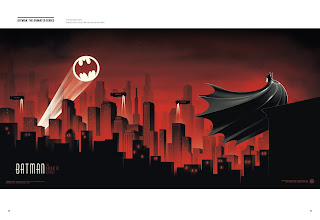 If you are a hardened fan of Batman: The Animated Series then it goes without saying that this book is a must own. Myself? I am a liker of the show but not so fantastical that I can name every episode or every event, I enjoy what I watch but I move on quickly, but this book had even me glued to my seat until I finished savouring every page. Because that’s what you must do with this book, it is not for reading, it is not for merely looking at, it is for savouring, it is for taking your time with, and it is for marvelling at because every page contains some kind of art that belongs in the Louvre or the National Gallery. 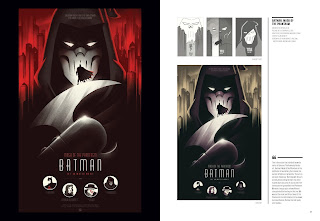 With every page a highlight it is difficult to pick just one or two items to lure you in some more but the interview with Justin Erickson is great and despite the wonderfully crafted finished products on most pages, the concept art is just stunning as well.
I cannot really add to what I have said above. This is one of those rare occasions where the book speaks for itself, and the marketing is spot on. Buy it.