Provocative and perplexing, Abel Ferrara’s Siberia is an existential journey peppered with dreamlike events and encounters.

Over a black screen as the opening credits run, Clint (the gravelly voiced Willem Dafoe) delivers a monologue describing childhood fishing trips with his father. In adulthood Clint runs a remote, rundown bar in the frozen Siberian wastes, where he scrapes a living trading goods and selling liquor to the locals, such as Inuit (Laurentio Arnatsiaq) and a woodsman addicted to gambling on a slot machine. One of his young Russian female patrons is pregnant and Clint may be the father, as the female pays him by offering her sexual favours.

Unsatisfied with his isolation, Clint drags out his dogsled, ties in his huskies, and embarks on a journey that would seem to be both literal and metaphysical, although his destination is unknown.

The Aboriginal term “dream time” may be a way of approaching the existential journey Clint makes. Apparently, the film is also inspired by techniques pioneered by Swiss psychoanalyst Carl G. Jung in his private diary ‘The Red Book’, in which Jung would evoke a fantasy in his mind and then insert himself into it. Clint seems to do the same, so we gradually assemble a few jigsaw parts of the life that led him to his hermit-like existence in a desolate, snow-laden cabin. 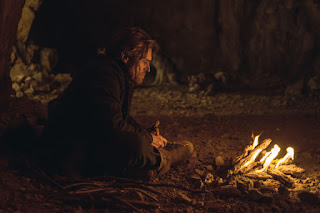 Clint’s lively, blue-eyed Huskie team which pull him through disparate dreamscapes provide a grounding reality within the fantasy, accompanying him through some of the most bizarre scenes. When Clint sets up camp in a cave where a hanging man, a dancing woman and a naked dwarf in a wheelchair inexplicably appear, the dogs’ reaction of perplexity is one we can all identify with.

The snowy landscape melts into other sites of memory, dream and fantasy – dark caves of nightmares, expanses of desert, an abandoned Russian death camp where naked men were shot and incinerated, a sunny lawn with children dancing around a maypole. These scenes evoke the depths of human horror punctuated by moments of abandonment and joy.

Clint is confronted with various versions of himself where he conjures up past family connections. His doctor-father appears doing surgery in a tent in the desert and they have a surreal chat. His ex-wife (Dounia Sichov) accuses him of emotional cruelty and neglect of his son. Not long after comes the recollection of a string of sexual encounters and later, his aged mother climbs on top of him for an ambiguous embrace.

In the end, is there is method in all this madness? If an audience is looking for a standard linear narrative, it should not be fooled by Clint’s initial monologue which seems to indicate that Siberia might simply be a grim character study of a rugged individualist.

Instead, writer/director Ferrara moves into the realm of experimental, surrealist filmmaking in a manner comparable to David Lynch. Siberia is an exploratory journey into the psychological wilderness of his male character.

Willem Dafoe, in his fifth collaboration with the director, attempts to illustrate almost every aspect of the male condition - self-justification, lust, stoicism, fear of inadequacy, self-loathing and the anger of disaffected masculinity. Siberia is unapologetically, a very ‘male’ oriented film which fluctuates between horror, confusion, gross comedy, explicit sex, psychological exploration, and finally ends in an encounter with a melancholy talking fish.