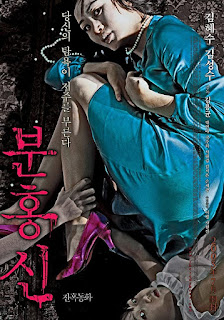 We love Halloween here at The DreamCage and we love the countdown to it even more as, every day in October, David Ames opens a window (well, writes an article) in his Hallow-vent Calendar of Asian horror films. His choice for Day 11 of Hallow-vent is The Red Shoes ...
Find the full calendar for Hallow-vent 2020 here. 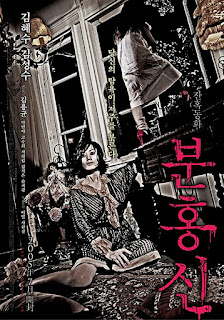 I came into today’s viewing wondering what I was in for. As a child, I had watched the 1948 film of the same name, the British drama The Red Shoes, starring Anton Wolbrook and Moira Shearer, with my grandfather multiple times. When I first saw this on the list of best Korean horror films, I was curious if there was a connection. There really isn’t, other than the presence of ballet, but I was still given an interesting evening. Today, we look at Kim Yong-gyun’s 2005 horror film The Red Shoes.

Loosely based on the 1845 fairy tale by Hans Christen Andersen, The Red Shoes follows the struggles of a woman dealing with the loss of her way of life, and her spiral into madness. Sun-jae was a normal mother and housewife. She took care of her husband, Sung-joon, and her daughter, Tae-su. While she is searching for her missing child one day after school, Sun-jae, in her search, travels back home, arriving earlier than usual, where she catches her distant and emotionally absent husband in the throes of an affair.

The film jumps ahead, and we see mother and daughter searching for a new apartment. Sun-jae is incredibly guarded and sensitive about her relationship and its end with all who ask, but she struggles forward, and begins to build a new life with her daughter. While she is settling in, Sun-jae is taken back by a young interior designer who is fixing up and redesigning Sun-jae’s new optometry office. One evening, after a particularly rough day, she comes across a beautiful pair of pink high heels in a subway car, and is infatuated with them. She takes them home, and here is where the film really takes off.

Everything that surrounds the shoes seems to be cursed, and anyone who touches them becomes obsessed with maintaining their control. This extends to Sun-jae’s daughter, friends, and any other female that is able to see them. Sun-jae begins to experience mood swings, violent outbursts, and even a sexual awakening, all associated with the shoes themselves. In the end, we find that her connection to the shoes is something more than anyone could have foreseen, as if she was destined to possess them.

I don’t want to give anymore away, because despite the convolution of the plot in many respects, this was an enjoyable watch. The story goes everywhere, sometimes to the detriment of the viewing, and although the pacing isn’t always the best, the ending really delivers.

Performance-wise, the only really standout role was that of Sun-jae, played by Kim Hye-soo, with such fervent passion and gusto that every turn of the plot draws us in. Her final scenes, the descent into madness, and the incredibly eerie final scene of her laughing hysterically in a dark and deserted subway station are some of the most striking elements of the entire film. She can shift from concerned to psychotic to manic all in the course of a few minutes, and she does so seamlessly, so it isn’t even remotely distracting.

The cinematography is the real high point of the film. Even when the story becomes difficult to follow, the visuals are always perfect. The look of the film is similar to that of a Fincher picture, bleached in certain aspects, but bright and gaudy in others. The shots are well orchestrated and there aren’t really jump scares permeating the screen. Instead, the film looks incredible, and the muted color scheme really helps the blood to pop off the screen…and there is a lot of it.

While there isn’t a ton of violence, those scenes that do happen are brutal and gory, and honestly striking, visually speaking. Whether it is the severing of someone’s feet, the slicing of calves on broken glass, or even the deliciously haunting nailing of a body to a wall, the kills that do appear are interesting and visually stunning.

Honestly, this isn’t the best film in terms of story. They lose the plot here and there, but damn was it a good watch. Even when I wasn’t entirely sure what was happening story-wise, I was drawn in by the sheer beauty of the film. I understand why this has appeared on so many lists. You should really check it out.