CLASSIC DOCTOR WHO ON BRITBOX – Frontios 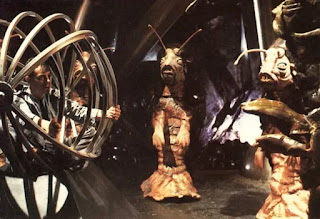 On 26th December 2019, 627 pieces of Classic Doctor Who content were made available to Britbox subscribers. Every Sunday in 2020, our Doctor Who expert, Tony Cross, looks back at some of the classic stories. Today is the Fifth Doctor adventure Frontios...

I like Frontios, even though the Gravis and his Tractators are victims of the eighties Doctor Who lacks budget. They look like fish-headed woodlice but lack animation and suffer from the much-mentioned-in-these-articles problem of 'waddle'. The willing suspension of disbelief is tough in those circumstances, even for a The Web Planet loving Doctor Who geek like me. However, there's enough oddness and tension in the build-up to their appearance to take a little edge off it.

Particularly praiseworthy is Mark Strickson's sterling work as Turlough dredges up a 'race memory' of the Tractators from deep in his subconscious and forces himself through his cowardice and out the other side. One of the themes of this story - intended or unintended - seems to be 'coming of age'. It is not really heavily pushed but this is the story when Turlough grows up. It is also the story of a boy king, Plantagenet, who is forced to take up his responsibilities to a failing colony, even if he is not ready for it. There is a hint of Henry IV-V about it if you are pretentiously minded like me.

Plantagenet (played with a perpetual pained pride by Jeff Rawle) talks in speeches. He is acting the King, perhaps because he is not one yet and it takes the events of this story to make him one. Or at least one more true to himself. Before this, he is trying too hard to be his father, the semi-legendary Captain Revere. After this perhaps - to steal a West Wing episode - the people of Frontios will let Plantagenet be Plantagenet.