CLASSIC DOCTOR WHO ON BRITBOX – Resurrection of The Daleks 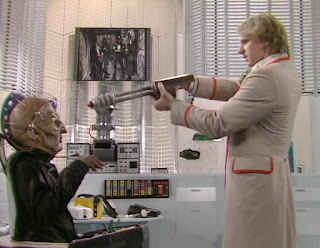 On 26th December 2019, 627 pieces of Classic Doctor Who content were made available to Britbox subscribers. Every Sunday in 2020, our Doctor Who expert, Tony Cross, looks back at some of the classic stories. Today is the Fifth Doctor adventure Resurrection of The Daleks...

It took me a long time to get around to watching the second episode of this story. I am not entirely sure why, but I suspect, to steal Tegan's virtually last words, it stopped being fun.

This is one of a handful of stories where the Doctor's victory feels like defeat. From the beginning of the first episode, people die. They die in groups and they die alone. They die by bullet, laser, Dalek and poisonous gas. They die quickly and quietly; they die slowly and screaming. The humans die; their duplicates die. Mercenaries die and Daleks die. Bad people die and good people die. If in 'The Doctor Dances' everybody lives; in Resurrection of the Daleks (almost) everybody dies.

The result is, you almost do not notice the plot because every time it starts to get rolling someone dies. It's a trap for the Doctor as the first step in a Dalek plan to do something unpleasant to Gallifrey, an attempt to invade the Earth, a daring Dalek attempt to rescue Davros from his Space Station prison and a desperate throw of the dice by a defeated Dalek race losing a war to the Movellans (who suddenly remembered that the Daleks have an organic content and have created a rather nasty shaving foam creating a virus that has been wiping out the Daleks). The Daleks need Davros to save them having failed, despite their advanced technology, to add virology, genetics and Dalek medicine to their programming.

Reduced in numbers and looking a little battered they have been forced to team up with a bunch of mercenaries led by Lytton (Maurice Colborne). Lytton is a ruthless bastard who seems to have agreed to work for the Daleks either for money OR because he and his men have some kind of uniform fetish. Quite why they are required to wear Dalek eye-stalk helmets as part of the deal is clearly above my pay grade.

The cast - in general - is pretty good, if wasted a bit: Rula Lenska as the cynical and weary Styles; Del Henney as Colonel Archer (a Brigadier substitute of sorts); Jim Findley as Mercer and Chloe Ashcroft as the pointless Professor Laird. But two special mentions should be made.

First of Leslie Grantham's - Dirty Den to be - as Kiston. He does not get much to do, being mind-controlled by Davros, but he certainly lurks with effective menace.

Second is Rodney Bewes as Stein. We have seen with the casting of Beryl Reid in Earthshock that sometimes-odd casting works. Sometimes. This time it does not. He is not helped by some of the terrible lines he is forced to speak but that does not really excuse weird line readings.

Oh and Terry Malloy in his first stint as Davros. The scenes with him and The Doctor shine out amongst some of the dross surrounding it. Particularly scenes of Dalek's lecturing each other about loyalty and all the dying.

Finally, this is Janet Fielding's last story as Tegan. I loved Tegan back in the day but I suspect that was less to do with the part and more to do with being a young man of a certain age confronted by an attractive woman in a leather mini-skirt*. Now I still like her but less so. She is given to whinging too much to the point at which you just wonder why she bothers to stay onboard the TARDIS but when she is good: in Kinda and Snakedance particularly she is very, very good. I will miss her, I think. Her leaving scene is pretty effective too, even if it just adds a final touch of misery to a story filled with grime and grimness. Perhaps we should be thankful she was not killed. Twice.

In the end, this story just depresses me and once again I must steal Tegan's words: "Too many good people died today." They do and I did not enjoy it much.

*I meant to mention Tegan's change of outfit in the last story. It is a symptom of JNT's blinkers. His opinion that the women are there to keep the Dad's (and hetero boys of a certain age) means that he abandons common sense for "sexiness". Tegan's been with the Doctor long enough NOT to choose a leather mini-skirt and high heels. What next? The assistant in a bikini?