Books - Back to the Future 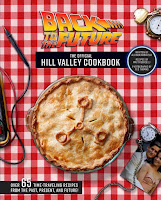 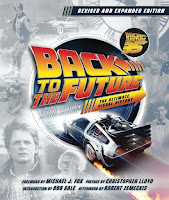 It was Back To The Future Day earlier this week and Titan Books keep the film's 35th anniversary celebrations going with the announcement of not just one but TWO tie in books...

For over three decades, the Back to the Future films have delighted audiences with the adventures of Doc Brown and Marty McFly. Now, you can celebrate the thirty-fifth anniversary of the original film with Back to the Future: The Ultimate Visual History by Michael Klastorin with Randal Atamaniuk, an updated look at the iconic movie trilogy and the wider world of the franchise.

Including over 400 rare and never-before-seen images from the creation of the movies and beyond, this deluxe volume also features a range of incredible inserts that fans will love. This revised and updated edition features interviews with the cast and crew, including Michael J. Fox, Christopher Lloyd, and director Robert Zemeckis. There's a deep dive into Telltale Games’ video game and IDW’s series of comics, and a look at the most memorable Back to the Future merchandise, such as Funko’s line of collectibles. You’ll even find an exclusive look at Back to the Future: The Musical, with commentary from writer and producer Bob Gale.
[Here's the trailer for the musical in case you didn't believe it was a thing - Ed]
So, anyway, armed with all the facts and trivia from the Ultimate Guide, you're going to want to throw a BTTF themed party to show off your new knowledge at. Fear not, Titan Books have your culinary backs here too with The Official Hill Valley Cookbook by Alison and Matt Robicelli.

Hill Valley may have changed a lot over the years, but the idyllic town of the beloved Back to the Future movies is a treat to visit in any time period. Divided into five chapters, this cookbook, the first of its kind for BTTF, explores the complicated history of Hill Valley through the best possible medium: food. Start your culinary journey in good ol' 1985 with some delicious American comfort food, then travel back to 1955 for some classic diner cuisine. Jump to the far future of 2015 and nosh on some dehydrated pizza. Things might get a little greasy in Biff’s alternative, dystopian 1985, but the hardy frontier food of 1885 will keep you going through shoot-outs, train robberies, and whatever else the Wild West has to throw at you. Featuring full colour photography, alternative ingredient suggestions, and helpful notes from some of your favourite characters, this time-hopping, genre-defying cookbook is the perfect addition to your kitchen of the future, or the past, or even the Wild West. 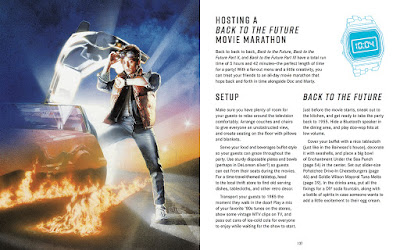 We had a quick look through it and magically found this page that assists you in "Hosting a Back to the Future Movie Marathon!" [There's a coincidence - Ed]. So we asked very nicely [Begged. You begged. - Ed] and the lovely people at Titan Books have let us share our menu choice of internal pages with you!
So... at our BTTF Movie Marathon party, starters would be Chicken Cordon Biff with a "classy honey mustard dipping sauce": 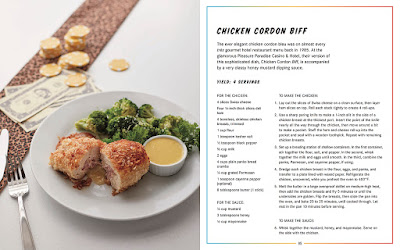 Then the main event and nothing says party more than a good chicken pie [look, it's our party, ok? - Ed] 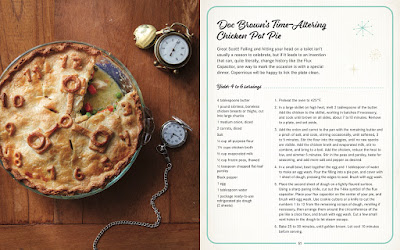 And to finish, how do you fancy an Exploding Candy Toaster Tart? [DON'T YOU CALL ME AN... oh, it's an iced pastry. Thanks, don't mind if I do - Ed] 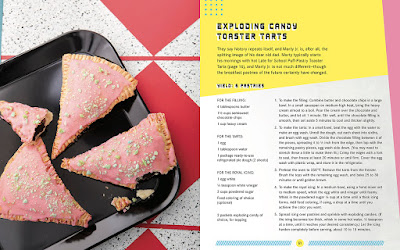