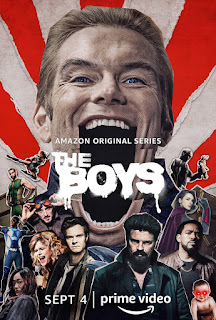 Kraig Taylor-Bryant takes a look at some of the themes in Season 2 of The Boys (with spoilers)...

I think the reason why The Boys in general is so successful is because it’s not trying to appeal to a wide audience of all ages, it’s aiming to gain the attention of adults. That opens up an array of possibilities; it means it can be brave enough to mock cinematic universes we know and love because older audiences will understand it’s a joke. The fact that it’s targeting adults also means that it can deal with very real issues by incorporating them into this “superhero fantasy world” (no matter how down to earth this one may be).

The first season introduced politics into the world of The Boys, with how the superhero company Vought was trying to get their Superheroes into the military, which, to me, instantly screamed metaphor for selling deadly weapons and also involved people from other countries having possession of those weapons. The season even touched on the more serious issues of our world, such as rape and racism. Season two, on the other hand, builds on all of this with a sense of injustice and then, later, on a sense of justice finally being served. Despite there being more female characters introduced in positions of power (as Billy Butcher even compliments in the show) through characters such as CIA Director Susan Raynor, Grace Mallory (founder of Butchers gang), and of course Madlyn Stillwell, these characters seem to still fall a little short in the first season, feeling very much like victims in their own ways. Season 2, on the other hand, allows characters such as Superheroine Queen Maeve, Starlight and of course Kimiko to stand out in how they help the boys to take down Vought, stop Homelander and beat up the Nazi Supervillain “Stormfront”. I think what makes this “girls get it done” moment (a reference to the movie we see Starlight and Stormfront promoting earlier in the season) so powerful is that all of these girls were beaten down before they eventually stood up to fight for what’s right. Starlight was sexually harassed by the Superhero “Deep” and eventually rose above it and decided to go against Vought’s desire to cover it up, Queen Maeve had given up on life in general following her failed relationship and Kimiko had a bone to pick with Stormfront because of what she did to her brother.

It’s Stormfront to me that is the key to relating this latest season of the show to America’s current political situation. Stormfront sort of acts as a metaphor for the racist voice that’s whispering in the ears of people in positions of power, influencing characters such as Homelander to protest for “supe-terrorists” to stop coming into the country. Now of course it sounds like it’s coming from a good place, when it just sounds like she doesn’t want terrorists in the country, but the show gives us obvious hints on how she’s trying to influence people and their beliefs into thinking anyone could be a terrorist. The introduction to one of the episodes even involves a seemingly harmless white man living his everyday life, constantly hearing about supe-terrorists, eventually leading him to shoot a simple corner shopkeeper for being of a different ethnicity. I think this intro is important because it’s trying to show us that our political leaders and what they say can have an impact on people in everyday lives. 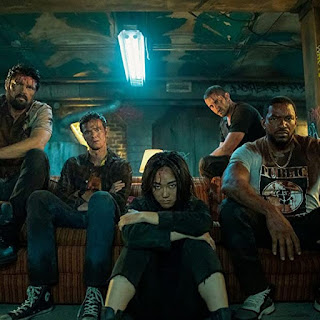 One thing that’s also had an impact on our everyday lives in real life is the Black Lives Matter movement, and I think this season does an okay job of supporting this. The character of Mother’s Milk had an interesting role in how he helps to uncover Stormfront’s origin story, by convincing the daughter of one of Stormfront’s victims to speak up about how her father was attacked because of his race. I think the idea of the authority figure attacking people because of the colour their skin makes this scene more relevant than ever, especially with how the murder of George Floyd sparked the Black Lives Matter protests. There were smaller hints of the racism in America being portrayed in the show in the first season, with how A-Train (yet another questionable superhero) is treated when he walks into a clothes shop and is constantly observed by a security guard until he notices A Train’s fans filming the exchange between them. I think it’s little scenes like that which show we can all band together and do something by spreading awareness of racist attacks, especially when authorities are involved, as Black Lives Matter may not have even been sparked if it weren’t for those that filmed the attack and posted it online when it came to George Floyd.

As I mentioned though, the way racism was dealt with in the second season was only “okay.” The season confronted the issues themselves with the introduction of a white supremacist character in Stormfront but it doesn’t necessarily offer black characters that play a major role throughout the season. Of course, as previously mentioned, Mother’s Milk does play a role in uncovering Stormfront’s past, but besides that there weren’t too many moments that screamed “Black Power” in the same way the “Girls Get it Done” fight sequence near the end of the season managed to. I think if there was a time in this show for black power to be represented, it was in this season involving a Nazi villain.

There’s also the intro to the final episode which certainly sticks out as something we can associate with modern politics, and that involves an initiative that Homelander calls “LAW”. This system is what they say you should do in the event of a superhero attack in your local school, which despite this being less relatable to us, the actions you must take are certainly applicable. The rules say you must “lock the doors/windows” “Arm yourselves” and “Wait”, the mention of arming yourselves relates mostly to Trump’s encouragement in giving teachers firearms. I think the ridiculousness of encouraging students to fight, over calling for help when it comes to dealing with superheroes is only a slight exaggeration of how ridiculous and unprofessional it is to try and take on a threat instead of seeking help, when your school is attacked.

I believe that this season of The Boys did do justice for certain elements of the Black Lives Matter movement and did a great job of promoting female equality, however, perhaps a better way to improve on things would have been to change the ethnicity of Lamp Lighter perhaps? (the character that agrees to stand up to Vought in court). Or perhaps somehow the introduction of a superpowered hero in general that was of a different ethnicity and could actively help The Boys in a tough situation (unlike A Train who will offer some help to get rid of Stormfront but still has a bone to pick with two main characters, Hughie and Starlight). Anyway, I hope the loss of Stormfront in Vought’s “Seven” main heroes, gives a way for a new black superhero to join the team that could perhaps help The Boys in some way, or they could at least give Mothers Milk a bigger role in the following season, as in some ways this season was a missed opportunity.
Follow Kraig on Twitter @kraigandhismac
Images - IMDb