Documentary – He Dreams of Giants 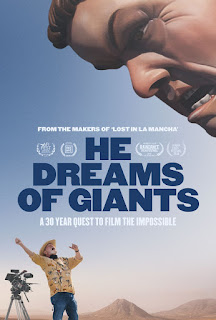 Steve Taylor-Bryant delves back into the perilous journey of Keith Fulton and Louis Pepe as they show Terry Gilliam trying to make The Man Who Killed Don Quixote - still - with their follow up documentary He Dreams of Giants...

I have been a fan of Terry Gilliam films since I watched Munchausen as a child. As a young adult I caught Brazil, then Fear and Loathing and my mind was set, I was a Terry Gilliam fan. Twelve Monkeys is my all-time favourite film and if I were forced to write a top 20 today at least 6 of the places would be Gilliam releases. I never thought we would see the day when The Man Who Killed Don Quixote would ever be finished though and the closest we would ever get was the wonderfully painful Lost in La Mancha from documentary filmmakers Keith Fulton and Louis Pepe. Spring forward 18 years and the documentary duo are back on the "Terry Gilliam tilts at windmills" ride with He Dreams of Giants, although thankfully this time there is a happy ending, but the pain, frustration and literal blood to get the movie over the finish line makes for a wonderful drama in itself and it is all caught fantastically on camera for the documentary.

“Its not a film it’s a medical condition”

The first part of He Dreams of Giants rightly chronicles the past and how we got to where we are today, scenes from La Mancha interspersed with archive footage from Gilliam interviews bring you up to speed with the journey from the early 1990’s to 2000 and the attempt to make the film with Jean Rochefort and Johnny Depp, and then takes you through the finance and cast iterations that followed for the next few years, we nearly got a Robert Duvall and Ewan McGregor version! Michael Palin came and went, John Hurt sadly had a cancer battle and the casting of Toby started with along list of fantastic actors before the role finally went to the brilliance of Adam Driver. The frustrations are well shown from Gilliam but the lighter touch of Jonathan Pryce claiming the troubles were all to buy time for him to be old enough for the role sort of make sense and have a calming influence when you have seen the finished film as you cant actually imagine another actor in the role. As some original cast members come back to the new production and some familiar faces from the crew meet the newer ones the production of Quixote gathers apace, albeit with the budget restrictions still hanging over Gilliam’s head as they always are. After having some of the budget trimmed to get the financiers to sign off on the making of the movie it was touching and almost meant to be to see that the Italian costume designer from 2000’s aborted attempt had kept all the costumes securely all these years and even better they fit the modern day cast. It was a beautiful melding of the two most famous attempts to produce this odyssey that Terry Gilliam had undertaken all those years ago. 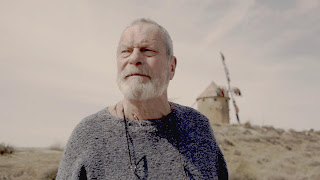 “If its in the script it must be in the budget”

You would think that finally getting to make the project you have waited most of your life for would be a calming event, a cause for celebration if you will but for most of the shoot there is a tortured Gilliam, a Gilliam that feels the weight of expectation and isn’t sure if as an older man now he can produce what he originally envisioned. Throughout He Dreams of Giants that fear of Gilliam’s and the mounting pressure to complete on time and on budget shows more and more and after a particularly fraught day with Gilliam feeling ill and finally cracking and throwing a temper tantrum that most filmmakers would have asked to be removed from a documentary it was pleasing to see Gilliam front up to his weaknesses and discuss the pressure he was under, eventually though he is rushed to hospital after urinating blood and genuinely thought he would die before finishing a film that could have killed him multiple times already. With a catheter full of blood and an onset medic the film finishes, and Gilliam goes home, but not before summing up his thoughts when answering a particular question…

Interviewer – “Would it be unfair of me to say that you don’t want to finish this film?”

TG – “Yes that would be unfair, I want this fucker out of my head”

And that is probably why you don’t see the same celebratory persona as the rest of the cast and crew when cheer finishing day 7, a day more than was achieved on the 2000 production, and aside from a few tears Gilliam is not as relieved and happy as the cast and crew when principal photography finally finishes, he has lived with this film too long, it has changed and budgets have changed so much over the past 30 years that he’s still unsure of whether he pas produced his masterpiece or failed everybody, but most of all I think he’s just exhausted from one of the most perilous and longest journeys to the screen of any story project. 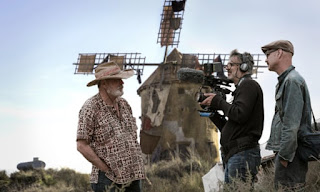 He Dreams of Giants is a wonderful bookend to Lost in La Mancha, it’s an incredibly well-crafted look at filmmaking, with unparalleled access that doesn’t try to conform to any documentary norms and instead lets Terry Gilliam and his journey drive the narrative. It is part fly on the wall, part art in itself with some beautifully produced cutaway scenes and some incredible gloss to its look. As a study of its protagonist it's flawless and warts n all, as a piece of entertainment for the viewer, it is well worth the 18 year wait since La Mancha but it is also a wake up call to financiers and producers that there really is incredible storytellers out there in the world of film if you would just stop stifling them with business and quarrels over who is right and who is wrong. The Man Who Killed Don Quixote is a wonderful slice of Terry Gilliam filmmaking but if any other filmmaker had had the issues with finance providers, insurance companies, and producers with egos that Gilliam has the film would never have been made and it is that drive, that determination, that stubbornness that He Dreams of Giants captures perfectly. If you are a fan of Terry Gilliam, or just a voyeur of troubled productions then this documentary is most definitely for you. Bravo Messrs Fulton and Pepe and their crew [insert 25-minute Cannes standing ovation here].
Follow Steve on Twitter @STBwrites
Images - Blue Finch
Email ThisBlogThis!Share to TwitterShare to Facebook