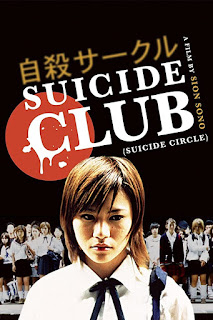 We love Halloween here at The DreamCage and we love the countdown to it even more as, every day in October, David Ames opens a window (well, writes an article) in his Hallow-vent Calendar of Asian horror films. His choice for Day 22 of Hallow-vent is Suicide Club ... 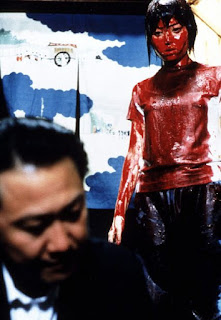 I have wanted to watch today’s film for years, but because of pretty recent events in my own family, as well as a pretty jarring rash of teen suicides in my area over the past five years, I have avoided it. This morning, I sat down and decided it was time, and I treated myself to a strange film; one that I wasn’t entirely sure I was a fan of until the end. Today we talk about Sion Sono’s 2001 Japanese satirical horror film Suicide Club.

The basis of this film is a six day period in which a large number of Tokyo citizens commit suicide, many in groups. It begins with a shocking scene where 54 schoolgirls all jump in front of a train, and we see the first real use of gore, as well as a tone for what is to come. While investigating this scene, two nurses commit suicide elsewhere in the city. Detective Kuroda and his team are chosen to investigate and what unravels is a strange mystery.

Next there is a group of high school students jump off a roof, and Kuroda’s own children begin to hear rumors of a suicide club somewhere in the city. When a hacker named “The Bat” contacts the police to tell them of a website that seems to post the numbers of suicides as dots (red for women and white for men), the plot thickens and the police begin to investigate this as not suicide but murder.

If I give away anymore, I will ruin this gory piece of satirical art. And yes, I just referred to this as art. While some of the scenes don’t land well (I’m looking at you, weird bowling alley Rock of Ages scene), the movie as a whole does make a pretty good commentary about the nature of Japanese society in the early 2000s, especially celebrity culture and its impact on the youth.

The gore is everything you want in a classic horror movie, with blood and violence that reminds me so much of Evil Dead that I thought maybe Sam Raimi got a producer credit at first. There are literal buckets of viscera in certain scenes, and the explosions of blood are fun if you are a fan of the genre.

Once again, this film is not scary but is rather disturbing, especially when you consider what Sono is trying to say about how impressionable and easily manipulated we as a society are by media. By bookending the movie with performances by a teen idol group known as Dessert (oftentimes spelled in different ways throughout the film), we see just what the director is going for.

I see now why this film has received such praise over the last two decades, and I have to admit that I think I would watch it again, just to examine more closely the message of the director.