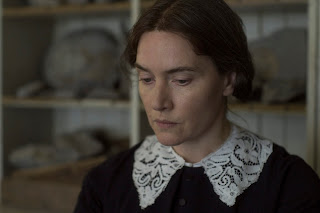 Ren Zelen has a bone to pick as she watched Ammonite at London Film Festival...

But cinema has to get the punters in somehow, and the promise of explicit lesbian sex scenes between acting luminaries such as Kate Winslet and Saoirse Ronan might do the trick. Let’s hope that it might also encourage some people to take a deeper look at Anning’s actual life, which is certainly full of its own drama and extraordinary triumph over almost insurmountable odds.

The film begins on the wintry coast of Lyme Regis, circa 1840, with ’amateur’ palaeontologist Mary Anning venturing out into inhospitable weather during the winter months, when most landslides occur exposing new fossils. It’s a dangerous pastime as the cliffs are unstable (the real Anning lost her dog in a landslide that only barely missed killing her).

Mary lives in a dingy seaside shop with her elderly mother (Gemma Jones) who is crushed by the past loss of a husband and eight babies. They scrape a living by selling the fossils Mary collects, cleans and identifies from her searches along the cliffs.

Lethargic, moody Charlotte Murchison (Saoirse Ronan) is the pampered young wife of Roderick Murchison (James McArdle), a gentleman member of the Royal Geographical Society. They come to Lyme Regis because Roderick wishes to seek out Mary Anning so she can teach him how to recognize various fossils from the stones that can be found on the beach.

He also offers to pay her to serve as a companion for his ‘melancholic’ spouse, who does not want to be left alone while Roderick eagerly rushes away on far-off expeditions for the Society.

Charlotte is not pleased at being left in the hands of a woman tasked with taking her on early walks on a wild, windy beach to forage in the mud for interesting-looking rocks. Mary too, isn’t delighted with the company of the sullen young woman. While she gets on with her work she suggests that Charlotte might go for a bracing swim, as her husband has instructed.

This turns out to be a bad idea as the fragile Charlotte comes down with a fever and has to be nursed by Mary under the instruction of the dashing new local doctor, Lieberson (Alec Secareanu).

Worried that Charlotte may die in her care, Mary visits her estranged friend Elizabeth Philpot (Fiona Shaw) for a jar of medicinal salve. Their uncomfortable conversation skirts the awkward topic of a past relationship.

As Charlotte recovers, she warms to Mary, who nurses her diligently. Soon her gentle womanly attentions break down the aloof exterior that Mary has cultivated. As their friendship develops, a tentative good-night kiss opens the floodgates to a passion that takes the two women (and possibly the audience) by surprise.

Of course, the illicit affair cannot last (although the two women are surprisingly publicly uninhibited for those socially straightlaced times, and their class difference also seems to have minimal impact, although the frugality of Anning’s life is later contrasted with Charlotte Murchinson’s lavish home). 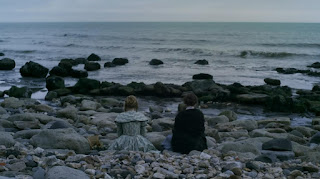 Ammonite offers excellent performances all round, as one might expect from this distinguished cast. Winslet portrays Mary as a tough, independent, repressed ascetic, inured to hardship and hard work. While Ronan embodies the delicate but ardent beauty who breaks down Mary’s long-held emotional defences.

The tragedy of infant mortality in Victorian England is touched upon. It is entirely true that Anning’s mother Molly lost eight of her ten children (although one of them tragically died when her nightdress caught fire). Mary’s only surviving sibling, Joseph, is never mentioned, (although in actuality he helped 11-year-old Mary dig up her ichthyosaur).

It was their father Richard that introduced Mary and her brother Joseph to fossil-hunting expeditions to supplement the family's income. It was a difficult time historically for the poor - the French Revolutionary Wars and Napoleonic Wars caused many hardships. It is known that Richard Anning was involved in organizing a protest against food shortages.

In Anning’s time women were not allowed to vote, hold public office, or attend university. In addition, her family were ‘Dissenters’ (not followers of the Church of England) which also caused them to be victims of discrimination. It would seem impossible that Anning could ever be acknowledged by the influential Geological Society of London, or even be allowed to attend meetings as a guest.

Anning's biographer, Shelley Emling, noted that prominent ‘geologists’ who had used Mary’s specimens, such as William Buckland and Roderick Murchison, (husband of a certain Charlotte Murchison) had multiple fossil species named after them, even after Mary Anning had done the hard work of finding, excavating, cleaning and identifying them.

At least Buckland showed concern regarding Anning’s precarious financial position, and to enable her to continue in her work, he persuaded the British Association for the Advancement of Science to award her a civil list pension in return for her many contributions to geology. The naturalist Louis Agassiz acknowledged Mary by naming two fossil fish species after her and one after Elizabeth Philpot, grateful for the advice the women had given him in examining fossil fish specimens during his visit to Lyme Regis in 1834.

The regard in which Anning was eventually held by the scientific community was shown in 1846 when, upon learning of her terminal cancer, the Geological Society raised money from its members to help Anning when she became too ill to work, and the Dorset County Museum made her an honorary member.

When she was buried in the churchyard of St Michael's, the Geological Society contributed to a stained-glass window in Anning's memory, unveiled in 1850. The inscription reads: "This window is sacred to the memory of Mary Anning of this parish, who died 9 March AD 1847 and is erected by the vicar and members of the Geological Society of London in commemoration of her usefulness in furthering the science of geology, as also of her benevolence of heart and integrity of life."

After Anning's death, Henry De la Beche, president of the Geological Society, wrote a eulogy he read to the Society and subsequently published - the first such eulogy given for a woman.

Instead of a pioneer in Palaeontology and a unique individual who surmounted social barriers of gender and class, Ammonite chooses to depict Mary Anning as an LGBT heroine. There is little evidence to suggest the real Mary Anning was gay or repressed, although much is known about her intellectual contribution to natural science. The real story however, seems of little interest to actor-turned-auteur Lee, who prefers to remould an extraordinary historical figure into a simple imaginary device.

I’m not deriding the idea in itself; we are in dire need of films and stories that see the world from the perspective of all genders, races and sexual persuasions, but why not choose an original tale and character? I’m not at all sure how the real Mary Anning would have felt about this kind of fictional transformation. Then again, I daresay she became used to her own achievements being overlooked, discounted, or appropriated in order to serve the purposes of others.