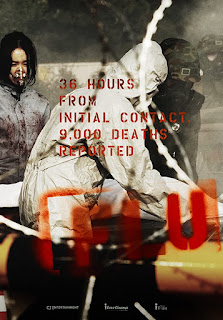 We love Halloween here at The DreamCage and we love the countdown to it even more as, every day in October, David Ames opens a window (well, writes an article) in his Hallow-vent Calendar of Asian horror films. His choice for Day 20 of Hallow-vent is Flu ... 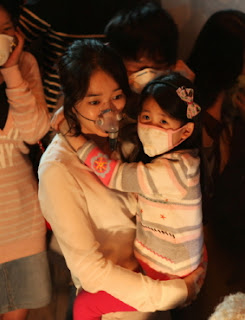 For the second time this year, it seems as though a list of the greatest Asian horror has lead me to a film that is not so much horror, but dealing with a situation that is horrifying. This film, more so than Cure, does have serious elements of horror, and honestly, with the way it portrays human nature, I can see why this made some lists. Today we look at Kim Sang-su’s 2013 South Korean disaster flick, Flu.
Flu follows Kang Ji-koo, a member of Budang’s emergency response team. After rescuing a young doctor, Kim In-hae, from a severe car crash, and developing a massive crush on her in the process, Kang returns to the car to retrieve the doctor’s purse, which contains important thesis work for her hospital. While this is happening, a smuggled shipping container of illegal immigrants has also made its way into the city. When opened by two brothers, Ju Byong-woo and Ju Byung-ki, they discover that all but one of the immigrants have died, seemingly of some horrible virus. In trying to deliver the survivor, Monssai, we start to see that one of the brothers is becoming sick as well.

While worrying about the sickness, the brothers lose Monssai who escapes into the wilderness, dazed and confused. Meanwhile, Kang has tried to deliver the purse to Kim, but instead meets with her daughter, and a bond is formed.

The sick brother is taken to the hospital where Kim works, and as he begins to code, it is made apparent that this disease is now running rampant across Budang. The doctors are dealing with upwards of thousands of cases almost immediately, and when they discover that the disease began in a shipping container, they are worried about a pandemic.

Kim’s daughter, Mi-reu is out feeding a local cat, when she is almost hit by a car. She is pulled to safety at the last second by Monssai, who knows that he is sick and tries to avoid coming too close. After he runs off, Mi-reu calls Kang and after badgering him for help, they begin to search for the missing man. From here, the pandemic breaks out, and the city and country officials begin locking down the city, leading to numerous rights violations and crimes against humanity.

I don’t want to give too much away, because A LOT happens in this film, but I will say it is definitely worth the watch. The film look reminds me of Train to Busan, not in content, but in the polished and stylized filmmaking. It looks gorgeous, and the simple makeup and practical effects we are treated to, showcasing the spread of the disease, are just graphic enough to portray the danger the characters are in.

Jang Hyuk is so likeable as Kang. He is a young, good-looking guy, with a heart of gold, which may sound cheesy, and it sometimes is, but it really works for the character. He is that “everyman” character we see in many films. He has the vibe of a Captain America, with lines like “No one will know, but I will.”

Along with Jang’s performance, Soo Ae as Dr. Kim is a revelation. Not only is she absolutely gorgeous, she is also a wonderful actress. She can portray strength with fighting for her daughter, fear when she is worrying about the health and the spread of the disease, and even caring for Kang. The chemistry between these two characters, and the worry over Mi-reu are the crux of the success of this film.

As for the horror aspects, there are some definite moments of real body horror here. The legions and the bloody vomit all elicit those classic uncomfortable feelings we are so used to with horror. That being said, the real horror comes with the emotionless officials who refuse to listen to the doctors, and even the president, and instead agree to block off and basically kill all of the infected. At one point we are even given a scene of a sports stadium full of dead bodies that are being moved by excavation equipment and destroyed with flamethrowers. Their lack of humanity is the real horror here.

In our current world, movies like this tend to hit a little closer to home. They make us aware of the potential for corruption and authoritarian rule in the face of mob rule and hysterical riots. This film was a great one, something truly enjoyable, especially for those who aren’t really excited about horror as a genre. As fitting as this film was for our current climate, it should be seen sooner rather than later.