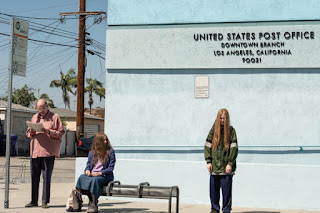 On recently at London Film Festival and in cinemas from today, Ren Zelen watched Kajillionaire...

Kajillionaire is writer/director Miranda July’s first feature in nine years and might seem, at first, to be a comedy-drama about a family of small-time grifters. However, as might be expected, July soon introduces us to bizarre characters whose strange life choices she uses as an opportunity to offer observations about society, the illusion of the ‘American Dream’, dysfunctional family relationships, individual loneliness, and the fear of intimacy.

In Kajillionaire, Evan Rachel Wood plays Old Dolio, a withdrawn 26-year-old who still lives with her parents Theresa (Debra Winger) and Robert (Richard Jenkins) but looks young enough to convincingly wear the uniform of a catholic schoolgirl, which she is sometimes required to do when participating in the feeble scams her parents manage to think up.

The family stay away from CCTV cameras and try to keep off the grid. We are never made aware as to why or when Theresa and Robert chose to have a child and then live this unconventional, hand-to-mouth lifestyle. Their precarious existence lands them in dire straits as they owe months of rent on their bolt hole in an abandoned office building which regularly floods in foaming bubbles.

They have to raise the rent money by various schemes, such as buying goods on credit then selling or returning them, stealing packages from the local post office or substituting themselves for skiving workers who can’t be bothered to turn up to courses.

Daughter Old Dolio, (named after an old man who Theresa and Robert unsuccessfully tried to persuade to leave them money in his will) is upset by the appearance of Melanie (Gina Rodriguez), a confident but bored mall employee who is excited by the idea of joining them in their cons. Melanie is vivacious and imaginative and soon endears herself to Theresa and Robert and challenges Old Dolio’s role as daughter in her dysfunctional family unit.

Unlike them, Melanie is grounded in a normal family life and soon sees that the con-man lifestyle isn’t nearly as glamourous as portrayed in the movies, and how, because of her odd upbringing, Old Dolio has a sad lack of social skills and is disengaged from the world around her.

Old Dolio has been treated merely as a business partner and taught to cheat her way from one minor theft to the next, sharing all gains with her parents in a three-way split. Strangely, her parents seem incapable of showing her any form of affection or providing any genuine human connection.

Although initially Melanie creates only a feeling of rivalry and jealousy in Old Dolio, she also awakens a sense of all the tender, emotional and even sexual sensations the young woman has been missing. Certain events come to a head which allow Melanie to remove Old Dolio from her parents. She then hits upon a ruse that will enable her to retroactively offer some of the fun, compassion and maternal affection that Old Dolio was only made aware of during a parenting class that she attended to make a few quick bucks from an absentee. 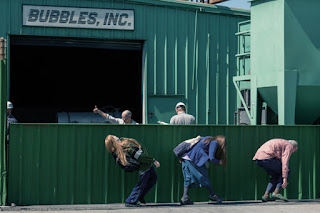 The principal actors Wood, Winger and Jenkins are all asked to deliver idiosyncratic performances, affecting limps, stilted speech patterns and various other quirks, but what is interesting about Kajillionaire is how quickly director July and her cast acclimatize us to the narrative’s unconventional situation through their deft world-building.

Once we buy into Kajillionaire’s world and get on the wavelength of its characters we are able to appreciate its humour and its pathos and empathise with Old Dolio’s dawning realization about her lost childhood and about what she may have been excluded from and understand her frustration with the way her parents have treated her.

Certain themes start to emerge - dealing with identity, with roots and belonging, and the difficulties of finding human connection in the emptiness of modern life. In one unexpectedly poignant vignette a home invasion scam forces Melanie and the family into an odd act of compassion, as they are confronted with the sad realities of loneliness, separation, and mortality.

Miranda July excels in creating peculiar characters and unconventional plots and placing them in a credible world. Despite her unconventional storylines and eccentric sense of humour, July almost always provides some profound reflections on life and human interactions. All of her skills are evident in Kajillionaire, and refreshingly, we can never guess precisely where her story’s unpredictable turns are going to take us. There remains space to interpret this unique journey and its enigmatic characters and steal from them some life lessons we may have taken for granted.