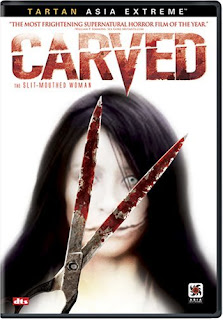 We love Halloween here at The DreamCage and we love the countdown to it even more as, every day in October, David Ames opens a window (well, writes an article) in his Hallow-vent Calendar of Asian horror films. His choice for Day 9 of Hallow-vent is Carved: The Slit-Mouthed Woman ... 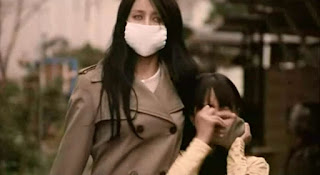 Few things about this year are as interesting to me as the Japanese folklore of which I am not usually aware. Maybe it is the unknown nature of these tales, or maybe it is the different cultural aspects which cause the unease to set in. I don’t know. All I know is that these stories have always fascinated me, and no story has fascinated me more in recent time than the story of the Kuchisake-Onna, which is the basis of today’s film: Koji Shiraishi’s 2007 spiritual feature, Carved: The Slit-Mouthed Woman.

As a basis, the film uses the legend of the Kuchisake-Onna, a woman who, according to legend wears a surgical or cloth mask over her face, and asks those she encounters if she is pretty. Depending on the response, she will either kill the person or use a giant pair of scissors to slit their face like hers.

In the film, the legend of the slit-mouthed woman is spreading through a small community, and everyone, teachers, students, parents, etc. are all talking about the story. When a young boy is taken from his friends by a woman matching the description, the community is thrown into hysteria. As more children are taken, Noboru, an elementary teacher, begins to hear a strange voice asking “Am I pretty?”, which is followed by another disappearance.

While this is happening, another teacher, Kyoko, whose students are those being taken, joins up with Noboru to find the source of the voice, find the children, and stop this madness. When family secrets and pasts are revealed between the two teachers, their course is set, and only they can stop the Slit-mouthed woman from striking again.

This film does not have a very big budget, but where it lacks funding and polish, it has a certain charm that would make an B-movie fan happy. Where they miss out on effects, the filmmakers have made up for it with practical effects and simple, classic gore to satiate those who want to see blood.

The children’s performances are okay, as is Haruhiko Kato’s as Noboru, but the real quality performance in the film comes from Eriko Sato as Kyoko. She is personable and understated and she plays the scenes dealt to her with attention to detail and emotional depth befitting a movie of much greater quality.

My only real issue with the film is that this could have been so much better had they followed the original legend closer, and avoided the elements of family drama with Noboru which aren’t needed for a film of this type. Either way, the movie works and is a fun little low-budget watch.