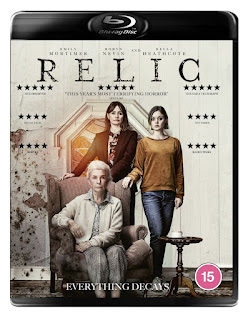 There is horror and pity in witnessing the mind of a loved one as it unravels and fragments. This is the misfortune of Kay (Emily Mortimer) who is called by concerned neighbours when her elderly mother Edna (Robyn Nevin) disappears from her isolated home in the woods.

Taking her own daughter Samantha (Bella Heathcote) with her for moral support, they set off to the old family house to see what might have become of Grandma Edna.

The first feature from Japanese-Australian Natalie Erika James’, Relic manifests its horrors slowly, perhaps influenced in part by the bleak emotional mood of J-horror family drama. Comparisons with Hereditary and The Babadook will also be inevitable, as these films are female-centred, closely involved with motherhood and largely confined to one house in which the horrors in the shadows are mainly an allegory for a state of psychological disintegration.

In Relic the supernatural elements seep in gradually, but the fear comes from the physical manifestations of Edna’s mental deterioration that begin to haunt her mildewed house, full of memories crumbling to dust.

After local police search parties find nothing, one morning, as suddenly as she disappeared, Edna reappears as if nothing had happened. She seems to be her old self, although unable to remember or explain her absence, and when examined by a doctor she appears smartly dressed, alert, and even a little impatient.

There are times when Edna is entirely lucid - hair smoothly pinned up, her clothes clean and practical. She converses sensibly with her daughter and granddaughter while she gets on with her hobby of candle making and carving.

However, she is prickly when questioned about the many Post-it notes stuck around the house bearing reminders such as “take pills,” or “close taps” or more cryptic ones such as - “don’t follow it” and “my mother had green eyes”. Edna also has the habit of wandering at night and talking to an small, grubby, stained-glass window that had been rescued from an old shack that belonged to Edna’s father, and placed in the door of the family house – a relic of the past.

Edna is irritated when she is treated like an invalid, but she quickly starts to deteriorate, and Kay is faced with tough decisions about her mother’s future while also being troubled by nightmares and wakeful nights when she must creep through the darkened hallways looking to find her mother on one of her nocturnal wanderings. 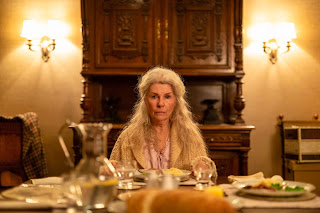 In showing the relationships between these three generations of women, director James indicates how care for the aging has become a burden disproportionately borne by women. In the character of Kay, Mortimer captures the emotional dilemma and the physical and mental exhaustion of having to make decisions and care for a difficult but increasingly helpless parent. Meanwhile, Bella Heathcote’s granddaughter Sam is dismayed by the the dawning realization that not everything can be fixed when she has to cope with her beloved grandmother’s increasing mood swings and unpredictability. Seeing her own mother’s anxiety, she begins to receive a sobering picture of her own possible future.

As Edna’s body succumbs to mysterious bruises that start to rot her fragile flesh, the plaster on the walls of the house becomes infested with sticky black mold. The house they find themselves trapped inside becomes a materialization of Grandmother Edna’s deteriorating state of mind.

There is considerable body horror as Edna’s flesh begins to fall away revealing the blackened husk beneath, but the truly chilling horror is the house that is becoming a metaphor for the mind of its inhabitant. As the inmate loses herself to dementia, the house becomes a labyrinth of dead ends, confusing passages, disappearing doors and narrowing corridors, like a rotting fairground mirror-house where the women lose themselves as Edna’ mind fragments and she becomes someone else.

The cinematography by Charlie Sarroff allows everyday objects and scenes to take on an ominous tone, even the pulsing lights on a Christmas tree only serve to reveal the moving shadows in the corner of our eye, but coupled with Brian Reitzell’s somewhat overused, conventional horror score, the film can occasionally overplay some of its horror-movie devices.

Relic takes a turn into traditional horror in the final act, but the film remains a strong debut from writer-director Natalie Erika James who deserves praise for tackling such a difficult and uncomfortable subject. She captures the intimate and complex intergenerational relationships of the women as they come to terms with the horror of tragic and irrevocable loss, as the past crumbles away and our loved ones become strangers.