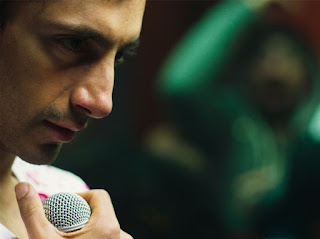 I had heard relatively little about Mogul Mowgli before London Film Festival but, just from the film's description, I thought I may enjoy it. I have seen the film's star and co-writer Riz Ahmed in stuff before and never been disappointed but what I was not prepared for was the emotional rollercoaster I was about to go on despite not understanding everything I was witnessing. This makes no sense does it? I will try my best to explain.

Riz Ahmed plays Zed a British Pakistani rapper about to hit the big time when he is invited on a tour of the United States. After a night at home with his traditional Pakistani family, he falls ill with muscle issues and wakes up in a hospital where he is diagnosed with an auto immune disease; his white blood cells are attacking his body, and he is recommended for a course of an experimental stem cell treatment that may aid in his recovery despite there being no actual cure. Sounds simple enough doesn’t it? And I followed this element of the story in the main, and watching Ahmed play the surprise to the denial to the acceptance to the trauma of the illness and the effect this would have on his life and his career, on his relationships, was powerful. I completely bought Riz Ahmed’s performance and I felt his pain and turmoil.
Where I came unstuck is in the film's flashbacks and in Zed’s hallucinations because, as a middle aged white guy who is not in any way related to the world in which these characters are born, I didn’t get the cultural nuances, I didn’t understand the religious aspects, and for my shame I know nothing of the Partition and how Pakistan came to be, so the train dream and the horrific acts mentioned hit me hard but maybe not as powerfully as it may impact another audience member who understands better than I. None of my misunderstandings are a fault of the film you understand, it is just not a culture or a world with which I am familiar although a lot of the lyrics to Zed’s raps go a way to explain it to me. 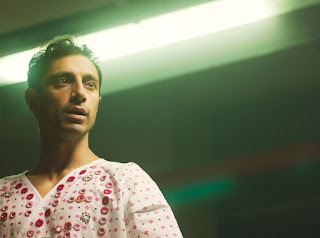 What I did understand though as both a son and a father was the relationship aspect of the film, the refusal to believe it could be a family weakness, the communication issues that are sadly universal it seems between fathers and sons, the struggle between being able to help and excepting help and the eventual rebuilding of that paternal relationship. This I understood perfectly and the on-screen scenes between Ahmed as Zed and Alyy Khan as his father Bashir were amongst some of the most affecting in the film.

On this, my first watch, I found Mogul Mowgli to be an intriguing if somewhat confusing film with two stellar performances and a lot of heart. When I next watch this film, and I will, I hope to have given myself enough basic education to finally understand those cultural aspects of the film that currently lie out of my grasp and I think my enjoyment of Mogul Mowgli and my personal experiences will be the better for it. If you have a better education on the nuances I missed in my learning, then Mogul Mowgli will be one of the better films you see this year, if you are willing to learn in order to watch the film I truly believe it will stun you, if you are happy enough to just watch the film for those aforementioned performances by Riz Ahmed and Alyy Khan then I assure you that you will still have not wasted your time.
Follow Steve on Twitter @STBwrites
Mogul Mowgli is on at London Film Festival from 10th - 13th October, both online and at select cinemas. Find out more and book tickets here.

Mogul Mowgli goes on general release in the UK and Ireland on the 30th October.