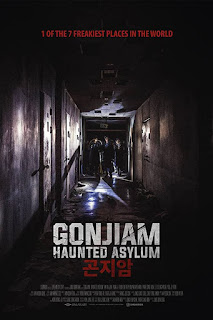 We love Halloween here at The DreamCage and we love the countdown to it even more as, every day in October, David Ames opens a window (well, writes an article) in his Hallow-vent Calendar of Asian horror films. His choice for Day 6 of Hallow-vent is Gonjiam: Haunted Asylum ... 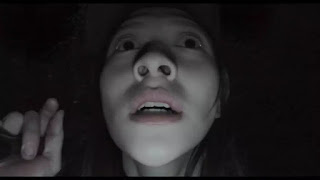 The found-footage horror movie has been done and redone, almost ad nauseum, since The Blair Witch Project changed the game in 1999. While this genre has its strengths in films like the original Paranormal Activity, REC, and even As Above, So Below, there are far more in this genre that are horrendous, unoriginal cash-grabs. Knowing this, I was at first a little apprehensive about today’s film, but I was worried for no reason. Today, we look at Jung Bum-shik’s South Korean frightfest Gonjiam: Haunted Asylum.

This film follows is based on the real-life, supposedly haunted Gonjiam Psychiatric Hospital, considered one of the most haunted locations in all of South Korea. The basis for the film is similar to the old American television show, FEAR, where contestants strap on dual-sided cameras which view both the person and what they see. This show, in the film, is called Horror Time, and these contestants are exploring the eponymous hospital in search of ghosts.

The hospital is known for the many spirits that haunt the locations. It is said that these are the spirits of the patients who were murdered here, as well as the director of the facility, who went missing after a mass of suicides plagued the patients. Along with this history, there is a door that no one has been able to open, Door 402, and these hotspots will be the focus of the Horror Time investigation.

The hospital will be explored by Ji-Hyun, Charlotte, Seung-Wook, Ah-Yeon, Sung-Hoon, and Je-Yoon, and guided/given orders by the “Captain” of the investigative show, Ha-Joon. As they make their way to the hospital, we are given a look into multiple teambuilding activities, a way that Ha-Joon finds to connect the contestants, and make the drama that much more immersive. Their investigation will be streamed live online, in hopes of achieving a large viewership, and garnering plenty of sponsorship money.

As the investigation begins, the explorers immediately begin to experience small elements of paranormal activity, slamming doors, sounds, strange feelings, but nothing too crazy. It isn’t until Ah-Yeon performs a ritual in hopes of conjuring spirits that the team begins to truly experience what the hospital has to offer. As the night goes on, and Ha-Joon’s true nature becomes apparent, the contestants inside the hospital are tortured and hounded by spirits, and the seriousness of their situation eventually catches up to all involved.

I don’t want to say too much more, but DAMN was this film great. I enjoyed basically every aspect of the movie. It was full of subversive imagery and scenes that made you feel flat-out uncomfortable. Sure, some of the scares and scenes were obvious, but that comes with the territory of a found-footage film. Even those predictable elements were done masterfully, and when the writers and director added in a strange time-warp element to the story, everything comes together.

If you are a fan of Asian horror, of found-footage films, or of the paranormal in general, this is a must watch. Gaining the status of the second-highest grossing horror film in the history of South Korea is well-deserved. This film needs to be seen by anyone who calls themselves a fan of Asian horror.