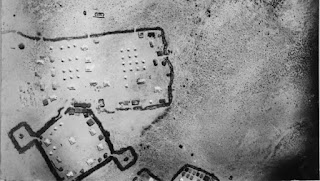 Strange Object is a great little 15-minute adventure that sounds like one thing but turns out to be something completely different, something better.
A narrator introduces a big leather-bound book of photographs and talks the documents and work of a mysterious Z Unit. The narration over the images of the photographs, all taken from the sky looking down, leads your mind at first down the path of science fiction, is this an alien experiment film? As the time progresses the narration takes a dark and historical turn, mentioning the first aerial bombings to occur in Africa, where the leaders and dignitaries on the ground believed these aeroplanes to be angels, and after this you know that what Strange Object actually is and that is a glorious way to fool someone into a history lesson that, if you telegraph what it is, then maybe they wouldn’t be so interested.
The photographs are indeed all taken by Z Unit, it turns out not an alien conspiracy but 1920’s Air Force in Somaliland, and the narration is not some experimental science fiction script but direct quotes from The Mad Mullah of Somaliland by Douglas Jardine O.B.E. the images are all taken a hundred years ago or more from the air above the African continent and with hindsight and context are now fascinating and Strange Object has left me wanting to know more which is the whole point of a history lesson. I congratulate Miranda Pennell on a wonderfully crafted film that I am glad I finally understood come the end.