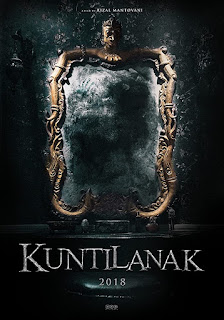 We love Halloween here at The DreamCage and we love the countdown to it even more as, every day in October, David Ames opens a window (well, writes an article) in his Hallow-vent Calendar of Asian horror films. His choice for Day 7 of Hallow-vent is Kuntilanak ... 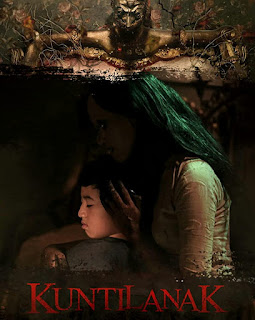 As we are seeing throughout this year’s Hallow-vent Calendar, there are a lot of supernatural ghost stories and legends in the Asian Horror genre. Whether is it cursed objects, cursed people, or cursed locations, it seems as though this region of the world deals much more in the spiritual realm than some of its western counterparts. Today’s film, hailing from Indonesia, continues the trend of cursed objects. Today, we look at Rizal Montovani’s 2018 film Kuntilanak.

The film opens with a father and son grieving the loss of a wife/mother. While the father drinks away his pain, the son is left to draw and suffer alone. That is, until he is called to by a strange voice that seems to know his name, and looks strangely like his mother. As the child hugs this new creature, she asks if he would like to come with her, to which he happily agrees. When the father goes to search for his son, he finds a trail of blood leading to an antique mirror, and no other trace of his boy.

Cut to later, where we see an orphanage of sorts, run by a kind older woman named. She has basically adopted five young children to live in her large house, and become one family. While four of the children seem to latch onto this idea, welcoming her as a mother and each other as siblings, the oldest girl, Dinda, is still struggling with the connection. Still, they are close, and spend every waking moment together, playing and talking.

When Donna, the mother, decides to travel to San Francisco to visit her other children and grandchildren, her niece Lydia and boyfriend Glenn agree to watch over the children. Glenn, the host of a paranormal-based television show, has been exploring the home of the father and son from the beginning of the film, which is now abandoned. It is now the stuff of local legend, as everyone discusses the haunting that must be taking place there. When he spots an old antique mirror which has been discarded, Glenn decides it is the perfect piece to replace the broken mirror Donna owns, and so takes it to the house.

From here, each of the children begin to experience a strange voice calling them. Dinda, in particular, is targeted, as she feels the most isolated at the home, and so she begins to see strange things. A woman in the backyard, her voice being called from the storeroom, an Indonesian goddess with pupil-less eyes. The paranormal activity in the house increases, and as Miko, one of the young boys, reads more about the kuntilanak, a spirit who kidnaps children and takes them to her realm, the children decide that this ghost is what they are dealing with.

When Ambar, the youngest girl goes missing, Dinda, Miko, Panji, and Kresna decide they must call the spirit out from the mirror and kill her, to save their sister and keep their family together. To know more, you have to watch!

Initially I wasn’t so sure of the film. It has the same look as The 3rd Eye, and I was worried that it follow suit in terms of quality. Luckily, although not terrifying or extremely sinister, Kuntilanak is an enjoyable haunted house picture, with plenty of creepy visuals and a decent performance from the cast.

None of the performances are spectacular, but most of the cast is around the age of 10 or 12. Still, they carry the film’s story well, and we do fear for their safety. Especially since no adults are really present to help.

The music and lighting are good, but the real positive to take away are the visuals. The look of the spirit in all its forms is easily the most effective of all, and the times we see the children interact with her, it is genuinely unnerving.

This is one that may not be the best, but it was definitely enjoyable. It reminds me of Monster Squad spliced with Oculus. Give it a shot and enjoy the fun.