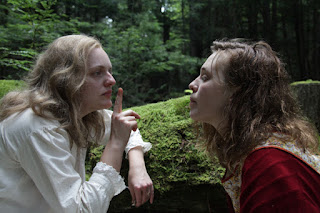 For some people, confronting a house full of ghosts might seem a more benign situation than braving a pack of judgemental housewives, especially in the 1950s, an era haunted by impossible standards for women. Finding herself amongst the snooty wives of academics, Shirley Jackson must often have been the target of their gossip and probably preferred to imagine herself trapped in ‘Hill House’.

Jackson reputedly cultivated an interesting, if fearsome, persona - prickly, idiosyncratic, unkempt, contemptuous. She was tolerated in academic circles, being a successful author in her own right. Those around her who were less talented or unconventional could only gain satisfaction through their housekeeping and by having affairs, sometimes with Jackson’s philandering husband, even if they could never quite tempt him away from her odd attractions.

Director Josephine Decker relishes the ‘attraction-repulsion’ dynamic, and in her latest film, Shirley, it’s the energizer behind relationships. However, it must be stressed that Shirley is not a biopic, it is based on Susan Scarf Merrell's novel of the same name, which imagined the life of Shirley Jackson and her husband Stanley Hyman, as seen through the eyes of young newlyweds who come to stay with them in their home. Moreover, it is told in the fevered style of one of Jackson's own Gothic stories (aided by cinematographer Sturla Brandth Gróvlen who helps to create the hothouse atmosphere).

Shirley shows us Jackson’s ordeal as a 1950s faculty wife at Vermont’s Bennington College. To take up some of his workload, Shirley’s husband Stanley Hyman hires a young teaching assistant, Fred Nemser (Logan Lerman) and moves him and his pregnant wife, Rose (Odessa Young), temporarily into their house.

Michael Stuhlbarg’s Hyman is all bonhomie and smarmy intellectual assurance, and yet there is some suggestion that he is not simply a serial adulterer lying to his neglected wife. Hynam is at times uncomfortably flirtatious, but he also has personal agendas.

Shirley is aware of Hyman’s indiscretions, but there is a bizarre and deep-seated alliance between them, one based on a rather brutal intellectual superiority and their consciousness of remaining outsiders and interlopers in the snobby, WASP academic community of North Bennington.

While playing the jovial host at dinner, Hyman actively encourages and enjoys the havoc Shirley creates by her inflammatory and pointed comments. Hymen’s congeniality masks a vicious contempt for the privilege and entitlement of his students, not least of all for his protégé Fred. 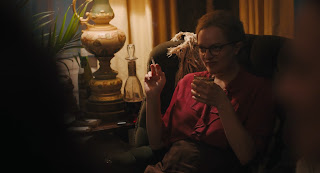 Meanwhile, young wife Rose's intention to analyse classes at the college is quickly quashed, as Hymen asks her to help with the household chores and the cooking while his wife is going through one of her depressions, to give Shirley time and encouragement to start writing her next novel.

Of course, conscious of the opportunity Hyman is offering to her husband and the fact that they are guests in their house, Rose cannot refuse. Her own intellectual ambitions are pushed aside, and she succumbs to the role of cook, housekeeper and nurse, while she waits for her unplanned pregnancy to come to term.

Shirley’s temper and brusque imperiousness cause Rose to bristle on more than one occasion, but eventually her admiration for her hostess’s writing and growing understanding of the fragility that underlies her fearsome exterior allows Rose to warm to her. Over time, the women begin to forge a mutually supportive connection.

Jackson begins work on a new novel (1951's’ Hangsaman’), based on the real-life disappearance of a local girl, Paula Jean Welden. The disappearance of the young college girl sparks the imagination of both women. They begin to speculate as to what might have happened - Was Paula murdered? Did she commit suicide? Did she feel trapped in her situation and just decide to vanish? As she creates the scenario for her tale, in Shirley's imagination, faceless Paula takes on Rose's face.

Becoming involved in Shirley’s creativity, Rose begins to transcend her task as housekeeper and takes on a more nurturing and contributary role. As she does so, she begins to undergo a transformation herself, finding the strength to examine her own beliefs and needs and start to oppose the gender restrictions of society.

As in all her recent roles, in Shirley Elisabeth Moss turns in an impressive performance. She plays Jackson as a complex woman, sometimes incapacitated with anxiety, at other times cynical, formidable, ferocious and mischievous. With a gaze full of supressed rage, she is like a volcano on the verge of eruption – dangerous.

As Rose, Australian actress Odessa Young is impressively able to play off Moss’s powerful portrayal and be equally enigmatic and unpredictable. Logan Lerman gives off the appropriate ‘privileged pretty boy’ vibes as Fred, the young buck willing to ‘do the right thing’ by his wife but also all too happy to take advantage of all the perks the male academic life has to offer.

Michael Stuhlbarg as Hyman maintains an intriguing balance between a womanizing and controlling manipulator, contemptuous of the class structures that surround him, and a husband who is actually affectionately amused by his wife’s unorthodox intellect and supportively in awe of her talent.

However, there is an odd and glaring omission at the centre of the movie - Shirley Jackson and Stanley Hyman actually had four children together, yet screenwriter Sarah Gubbins and director Decker choose to portray them as childless, even though Jackson wrote two humorous books about parenting – ‘Life Among the Savages’ and ‘Raising Demons’.

Until her death in 1965 at the age of 48, from heart problems brought on by smoking, anxiety and chronic ill-health, Jackson published over 200 short stories, two memoirs and six novels. Jackson once said, “I wrote of neuroses and fear and I think all my books laid end to end would be one long documentation of anxiety.”

Her characters are often tormented by neuroses and find social contact painful, so it is not surprising that Jackson herself had to overcome bouts of depression and agoraphobia. In some of her stories the horror is explicit, but in others it is more obscure and ambiguous. Often she holds up a mirror to some of the most sinister, irrational and selfish traits of mankind, and in that reflection her readers might realize some harsh truths about humanity and perhaps about themselves.