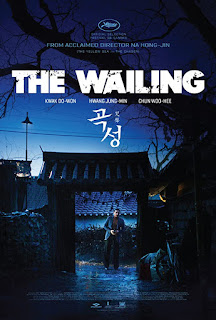 We love Halloween here at The DreamCage and we love the countdown to it even more as, every day in October, David Ames opens a window (well, writes an article) in his Hallow-vent Calendar of Asian horror films. His choice for Day 14 of Hallow-vent is The Wailing ...

Have you ever watched a horror film, and been so completely taken aback by the look and brilliance that it transcends the genre and becomes a serious work of art? I have seen this approach with classics like The Shining or The Exorcist, but sadly that barrier is rarely crossed. I am happy to report that I have another film to add to that definition. Today we look at the South Korean masterpiece from director Nah Hong-jin, 2016’s The Wailing.

This film follows a somewhat buffoonish police officer, Jong-goo, in the small town of Gokseong, as he deals with the strange appearance of an even stranger Japanese man in the forest outside the village. From the moment this stranger has appeared, eerie and unsettling things have been happening, and horrendous murders have been committed by seemingly normal and even loving people. This strange infection appears to be spreading, causing people to murder their entire families.

As this trend continues, and rumors and legends begin to spread about the stranger, Jong-goo and his officers investigate, somewhat ineptly and comically, but after more of this violence occurs, the police officers venture into the woods to find the Japanese man. When they do, they are confronted with what seems to be incontrovertible truth that this stranger is somehow responsible for the violent actions of the villagers.

After finding proof that his daughter may be a target, Jong-goo goes ballistic. When he returns home, his daughter begins to act strangely as well, and as his worst fears become reality, he must seek the help of family and a local shaman to combat what they feel must be a curse.

I don’t want to reveal anymore, because this film is a ride from start to finish. It begins in a strangely funny way, and the comedy sticks around for a good chunk of the film, all while the violence increases. There is a dramatic shift though, and the latter part of this movie is as dark as dark can be, in the most wonderful way possible. It may be long, sitting at two and a half hours, but the film justifies its epic run time with such brilliant filmmaking that we are at a loss for the entirety.

Everything is so beautiful in this film. I felt like I was watching something from Park Chan-wook or Zhang Yimou. The colors are brilliant, and then fade as the content darkens. The composition of shots is meticulous and calculated with Christopher Nolan precision. It truly is a work of art.

Kwak Do-won is wonderful as Jong-goo. He can play the simple, idiotic and inept cop who overreacts and is scared, but his shift to worrisome father, and angry vigilante is brilliant. The other major shining performance is by Kim Hwan-hee, who plays Jong-goo’s daughter, Hyo-jin. Much like the child in Phone, she does a wonderful job as an innocent child, but when she transforms into a possessed monster, she is terrifying in the best possible way. She shows off quite an impressive range for someone so young.

The biggest takeaway from this film is that they find a way to bridge eastern Mythology and legend with modern fears of outsiders, and horror tropes like zombies and vampires. The whole thing is so well-crafted, and there are so many twists and turns, that at the end you aren’t sure of anything. This is a must watch, and honestly, it is one of the best films I have seen in the last ten years.